INDEPENDENCE, Iowa (AP) — A judge has approved a plea deal that imposes two years’ probation and a suspended prison term for an Iowa farmer who appeared on “The Bachelor.” 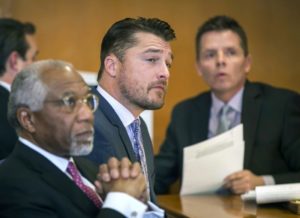 Buchanan County District Court records say the judge accepted the plea agreement Monday between Chris Soules and prosecutors “because it is in accordance with the pre-sentence investigation report recommendations.”

Soules pleaded guilty in November to a reduced charge of leaving the scene of a serious injury accident for the April 2017 crash that killed 66-year-old Kenny Mosher. Soules was arrested after he rear-ended Mosher’s tractor. Soules called 911, performed CPR on Mosher and waited for first responders, but he left the scene before officers arrived.

Soules appeared on “The Bachelor” and “Dancing With The Stars” in 2015.