GREENBELT, Md. (AP) — A federal judge in Maryland said Wednesday that there is a “very high likelihood” he will order a mental evaluation for a California man charged with trying to assassinate Supreme Court Justice Brett Kavanaugh.

U.S. District Judge Peter Messitte said during a brief hearing that he believes a mental evaluation will show him whether Nicholas John Roske, 26, is fit to assist his defense, enter a possible guilty plea or stand trial. No trial date has been set. Messitte said he is likely to order a mental evaluation for Roske when the parties return after approximately 45 days for a subsequent hearing. 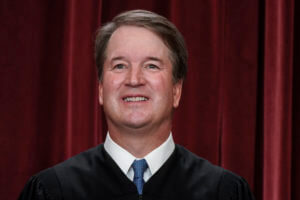 FILE – Associate Justice Brett Kavanaugh joins other members of the U.S. Supreme Court as they pose for a new group portrait at the Supreme Court building in Washington, Friday, Oct. 7, 2022. A federal judge in Maryland said Wednesday, Oct. 26, that there is a “very high likelihood” that he will order a mental evaluation for a California man charged with trying to assassinate Kavanaugh. (AP Photo/J. Scott Applewhite, File)

Defense Attorney Andrew Szekely told the judge that the defense doesn’t have any present concerns about Roske’s mental competency.

The judge asked Roske several questions routine questions including his age, last address and last job to get “preliminary sense of where he is.” Roske answered the questions without a problem and said he knew he was appearing in federal court.

According to court filings previously made public, Roske told unidentified internet users that his goal was to reverse the then-leaked draft decision that ultimately overturned the 1973 Roe v. Wade ruling establishing constitutional protection for abortion.

Roske is charged with attempting to murder a justice of the United States. He has pleaded not guilty.

Prosecutors say Roske, who had recently worked as a substitute teacher, traveled from California to Kavanaugh’s home in Chevy Chase, Maryland, with the intent of killing him. Roske pulled up near the home in a taxi shortly after 1 a.m. on June 8 carrying a suitcase with a gun and ammunition; a tactical chest rig with pepper spray and a knife; a flashlight; a laser; a thermal monocular and other burglary tools, according to court papers.

Spotted by two U.S. marshals who were part of 24-hour security provided to the justices, Roske was apprehended after he called 911 and told a police dispatcher that he was near Kavanaugh’s home and wanted to take his own life.

The leaked opinion draft led to protests, including at several of the justices’ homes. Roske’s arrest spurred the House to approve a bill expanding that around-the-clock security protection to the justices’ families.