MINNEAPOLIS (AP) — The judge in the George Floyd murder case refused a defense request to immediately sequester the jury Monday, the morning after the killing of a Black man during a traffic stop triggered unrest in a suburb just outside Minneapolis.

Amid the Derek Chauvin trial in Minneapolis, Daunte Wright was shot and killed during a traffic stop, sparking protests in the city. The officer claims she thought she was grabbing her taser when she fatally shot the 20-year-old black man.

The request came from the attorney for former Minneapolis police Officer Derek Chauvin. Defense attorney Eric Nelson argued that the jurors could be influenced by the prospect of what might happen as a result of their verdict.

“Ultimately, your honor, the question becomes will the jury be competent to make a decision regardless of the potential outcome of their decision,” Nelson said. 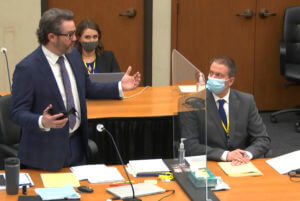 In this image from video, defense attorney Eric Nelson, left, discusses motions before the court as defendant, former Minneapolis police officer Derek Chauvin, right, and Nelson’s assistant Amy Voss, back, listen, Monday, April 12, 2021, as Hennepin County Judge Peter Cahill presides over the trial of Chauvin at the Hennepin County Courthouse in Minneapolis. Chauvin is charged in the May 25, 2020 death of George Floyd. (Court TV)

Judge Peter Cahill said he will not sequester the jury until next Monday, when he anticipates closing arguments will begin. He also denied a defense request to question jurors about what they might have seen about unrest following Sunday’s police shooting of 20-year-old Daunte Wright in Brooklyn Center.

In the wake of the shooting, hundreds of protesters broke into about 20 businesses at a shopping center, jumped on police cars and hurled rocks and other objects at police in Brooklyn Center. Officers in riot gear fired gas and flash-bang grenades.

Prosecutor Steve Schleicher argued against sequestering the Floyd jury, saying: “I don’t think that would be an effective remedy.” He also opposed questioning the jurors.

“World events happen,” Schleicher said. “And we can’t have every single world event that might affect somebody’s attitude or emotional state or anything be the grounds to come back and re-voir dire all the jurors.”

The judge had previously asked jurors to avoid news during the trial.

The ruling came as the trial entered its third week, with the prosecution close to wrapping up its case and giving way to the start of the defense. Prosecutors built their case on searing witness accounts, experts condemning Chauvin’s use of a neck restraint, and medical authorities attributing Floyd’s death to a lack of oxygen.

When testimony resumed Monday morning, Dr. Jonathan Rich, a cardiology expert from Northwestern Memorial Hospital in Chicago, echoed earlier experts in saying that Floyd died of low oxygen levels from the way he was held down by police.

He rejected defense theories that Floyd died of a drug overdose or a heart condition.

“It was the truly the prone restraint and positional restraints that led to his asphyxiation,” the expert said.

In fact, he said, “Every indicator is that Mr. Floyd had actually an exceptionally strong heart.”

Rich said he had reviewed Floyd’s autopsy report. He said that some narrowing of the arteries is extremely common, and that Floyd had a mildly thickened or mildly enlarged heart but that that would be normal in someone with high blood pressure.

Corroborating other experts’ testimony, Rich said that Floyd was “restrained in a life-threatening manner,” noting among other things that he was facedown on the ground, a knee was on his neck, his hands were cuffed behind his back and being pushed upward, and a knee was on the lower half of his body. 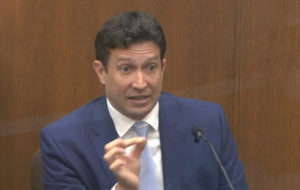 In this image from video, Dr. Jonathan Rich, a cardiologist, testifies as Hennepin County Judge Peter Cahill presides over court Monday, April 12, 2021, in the trial of former Minneapolis police Officer Derek Chauvin at the Hennepin County Courthouse in Minneapolis. Chauvin is charged in the May 25, 2020 death of George Floyd. (Court TV)

Rich said that as one officer noted on video that Floyd was passing out, police probably still could have saved his life if they had repositioned him so that his lungs could expand again. And once an officer noted that Floyd’s pulse had stopped, police still had a significant opportunity to save his life by administering CPR, he said.

Derek Chauvin, 45, who is white, is charged with murder and manslaughter in Floyd’s May 25 death. Police had been called to a neighborhood market where Floyd was accused of trying to pass a counterfeit bill.

Prosecutors say Chauvin had his knee on Floyd’s neck as the 46-year-old Black man lay pinned to the pavement for 9 1/2 minutes. Bystander video of Floyd, pinned by Chauvin and two other officers as he cried, “I can’t breathe!” and eventually grew still sparked protests and scattered violence around the U.S.

Chauvin’s attorney is expected to call his own medical experts to make the case that it was not Chauvin’s knee that killed Floyd. The defense has not said whether Chauvin will testify.