A judge is expected to rule by next week on whether a former Michigan police officer who fatally shot a Black motorist in the back of the head during a struggle over a Taser will stand trial for second-degree murder.

Grand Rapids District Court Judge Nicholas Ayoub said Friday during the final day of Christopher Schurr’s preliminary examination that he will review the evidence and issue a written opinion on Monday. 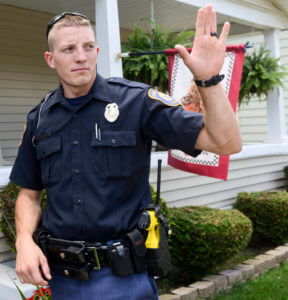 Schurr is charged in the April 4 slaying of Patrick Lyoya, 26, following a traffic stop, short foot chase and scuffle across lawns in a Grand Rapids neighborhood.

The traffic stop, Schurr’s questioning of Lyoya and struggle were captured on the officer’s body camera video. Lyoya’s shooting was recorded on the cellphone of a passenger in his car.

Lyoya, a native of the Congo, was on the ground when he was shot.

Schurr, who is white, later was fired by the police department.

The only witness called Friday was Grand Rapids police Capt. Chad McKersie, who testified on behalf of the defense and said Lyoya had gained some advantage over Schurr.

“You can see Officer Schurr present the weapon, and it was immediately grabbed by Mr. Lyoya,” McKersie said of the Taser. It “appears the officer was unable to control that individual.”

McKersie said the officer’s police body camera video appears to show Schurr tiring as he and Lyoya fought. McKersie also said that Lyoya appeared to have a weight advantage.

During “a long, drawn-out struggle, you can only go at 100% for so long,” McKersie said.

Prosecution witness Wayne Butler testified Thursday during the first day of Schurr’s preliminary examination that the officer “always had the upper hand” during the struggle with Lyoya.

Butler lives in the neighborhood where Schurr pulled over a car being driven by Lyoya. Butler saw the struggle, but not the actual shooting. 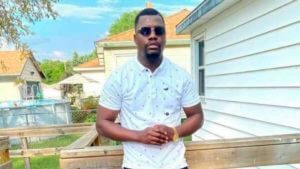 Video shows Schurr telling Lyoya that he stopped his car because the license plate didn’t match the vehicle. Roughly a minute later, Lyoya began to run after he was asked to produce a driver’s license.

Schurr fired the fatal shot while demanding that Lyoya let go of the officer’s Taser. The device discharges small amounts of electricity to incapacitate someone.

Schurr’s attorney, Matt Borgula, argued Friday that the shooting was justified because Schurr was met with force during a lawful arrest.

Kent County Prosecutor Christopher Becker said the only issue in the case is whether there is some sort of justification for the shooting.

“Ultimately, that’s a jury question,” he said. “It’s going to be up to 12 people from Kent County to make this decision as to whether this is reasonable or whether this is necessary.”