BRUNSWICK, Ga. (AP) — Jurors were shown graphic, closeup police photos Monday of the gunshot wounds that killed Ahmaud Arbery, while the first officer to find the 25-year-old Black man bleeding in the road testified he did not try to render medical aid because it would not have been safe.

Three white men are on trial for murder and other crimes in the slaying of Arbery, who was chased and shot Feb. 23, 2020, after he was spotted running in a neighborhood just outside the port city of Brunswick.

Glynn County police Sgt. Sheila Ramos walked the jury through dozens of crime scene photos she took about an hour after the shooting. Several jurors could be seen squirming as Ramos showed Arbery’s body lying in the street under a bloodstained covering. Other images showed closeup views of the gunshot wounds to his wrist as well as grievous injuries to his chest and underneath one of his arms.

Ricky Minshew, then a Glynn County police patrol officer, testified he arrived at the scene in the Satilla Shores subdivision about a minute after the gunshots sounded. Arbery was lying facedown in the street with blood pooling around him.

Minshew testified he heard Arbery make a noise he described as a “death rattle.” The officer radioed for 911 operators to send emergency medical responders, but said he did not have the training or equipment to treat such serious injuries.

“Without having any other police units to have my back, there was no way I could switch to do anything medical and still watch after my own safety,” Minshew said.

Father and son Greg and Travis McMichael armed themselves and used a pickup truck to pursue Arbery after they spotted him running in their neighborhood. A neighbor, William “Roddie” Bryan, joined the chase and took cellphone video of Travis McMichael shooting Arbery in the street at close range.

No arrests were made for more than two months until the video of the killing leaked online, sparking an outcry amid a national reckoning over racial injustice. The Georgia Bureau of Investigation took over the case from local police. Both McMichaels and Bryan were soon charged with murder and other crimes. 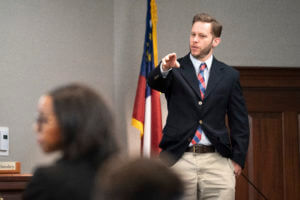 Former Glynn County Police Officer Ricky Minshew points out defendant Travis McMichael during the trial for the shooting death of Ahmaud Arbery at the Glynn County Courthouse on Monday, Nov. 8, 2021 in Brunswick, Ga. Greg McMichael and his son, Travis McMichael, and a neighbor, William “Roddie” Bryan, are charged with the February 2020 death of 25-year-old Arbery. (Sean Rayford/Pool Photo via AP)

Defense attorneys said the men were justified to chase and attempt to detain Arbery because he had been recorded by security cameras inside a nearby home under construction and they suspected he was a burglar. They say Travis McMichael fired in self-defense when Arbery attacked him with fists and tried to grab his gun.

Arbery’s mother told reporters outside the courthouse she was confused why more was not done to help her badly wounded son.

“He had a guy lying in the road who was covered in blood,” Wanda Cooper-Jones said. “I can’t understand why he didn’t render aid.”

When police arrive at a scene of gunfire, their first priority is to look for and mitigate any threats “and then they can come back and deal with the injured,” said Keith Taylor, a former police sergeant in New York City who’s now a professor at John Jay College of Criminal Justice.

“A gunshot wound of the nature that was inflicted on this victim, that would probably be beyond the scope of ability for this officer to address,” Taylor said, noting police generally have limited medical training.

Cooper-Jones stayed in the courtroom as the graphic photos were shown and could be heard exhaling quietly as Ramos identified closeup images of a gaping shotgun wound in her son’s chest. Arbery’s father, Marcus Arbery Sr., got up and walked out before the jury was shown the images.

The second officer to respond to the shooting, William Duggan, testified Friday and jurors watched portions of his body camera video in which Duggan rolled Arbery over and pressed a hand to his wounded chest.

“I had pressure on, but there was nothing I could do,” Duggan told other first responders on the video, saying Arbery died after about two minutes.

Ramos said Arbery had nothing in his pockets — no keys, cellphone, wallet or ID. Police identified his body using his fingerprints, she said.

She also photographed a home near the shooting scene where one of the shotgun blasts sent a projectile through a front window and into an inside wall. No one was injured.

The jury seated Friday for the trial is disproportionately white. Superior Court Judge Timothy Walmsley allowed the jury to be sworn over the objections of prosecutors, who said several Black potential jurors were excluded because of their race, leaving only one Black juror on the panel of 12.