FORT LAUDERDALE, Fla. (AP) — The jurors who will decide whether Florida school shooter Nikolas Cruz is sentenced to death or life without parole began their deliberations Wednesday as the three-month trial nears its conclusion.

Cruz, 24, pleaded guilty last year to the murders of 14 students and three staff members at Parkland’s Marjory Stoneman Douglas High School on Feb. 14, 2018. The trial has only been to determine his sentence. 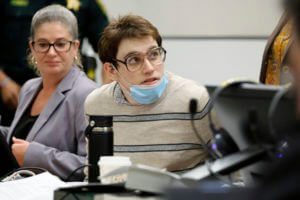 Marjory Stoneman Douglas High School shooter Nikolas Cruz is shown at the defense table after a break in closing arguments in the penalty phase of Cruz’s trial at the Broward County Courthouse in Fort Lauderdale, Fla. on Tuesday, Oct. 11, 2022. Cruz previously plead guilty to all 17 counts of premeditated murder and 17 counts of attempted murder in the 2018 shootings. (Amy Beth Bennett/South Florida Sun Sentinel via AP, Pool)

Cruz’s massacre is the deadliest mass shooting that has ever gone to trial in the U.S. Nine other people in the U.S. who fatally shot at least 17 people died during or immediately after their attacks by suicide or police gunfire. The suspect in the 2019 massacre of 23 at an El Paso, Texas, Walmart is awaiting trial.

The jurors are being sequestered during their deliberations, which could take hours or days — no one knows. They have been told to pack for at least two nights.

Here is a look at the case, how the 12-person jury will come to a decision and what will happen after that.

WHAT DID CRUZ DO?

Cruz, by his own admission, began thinking about committing a school shooting while in middle school, about five years before he carried it out. He purchased his AR-15-style semi-automatic rifle almost exactly a year before the shooting and his planning became serious about seven months in advance. He researched previous mass shooters, saying he tried to learn from their experience. He bought ammunition, a vest to carry it and a bag to hide it. He picked Valentine’s Day to make sure it would never be celebrated at the school again.

He took an Uber to the school, arriving about 20 minutes before dismissal. He went inside a three-story classroom building, shooting down the halls and into classrooms for about seven minutes. He returned to some wounded to kill them with a second volley. He then tried to shoot at fleeing students from a third-floor window, but the thick hurricane glass thwarted him. He put down his gun and fled, but was captured about an hour later.

WHAT HAPPENED AT THE TRIAL?

Lead prosecutor Mike Satz kept his case simple. He played security videos of the shooting and showed gruesome crime scene and autopsy photos. Teachers and students testified about watching others die. He took the jury to the fenced-off building, which remains blood-stained and bullet-pocked. Parents and spouses gave tearful and angry statements. 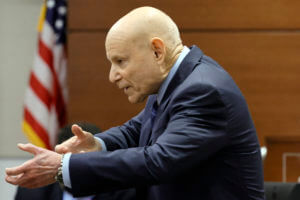 Assistant State Attorney Mike Satz gestures as if he is holding a rifle while giving his closing argument in the penalty phase of the trial of Marjory Stoneman Douglas High School shooter Nikolas Cruz at the Broward County Courthouse in Fort Lauderdale, Fla. on Tuesday, Oct. 11, 2022. Cruz previously plead guilty to all 17 counts of premeditated murder and 17 counts of attempted murder in the 2018 shootings. (Amy Beth Bennett/South Florida Sun Sentinel via AP, Pool)

Cruz’s lead attorney Melisa McNeill and her team never questioned the horror he inflicted, but focused on their belief that his birth mother’s heavy drinking during pregnancy left him with fetal alcohol spectrum disorder. Their experts said his bizarre, troubling and sometimes violent behavior starting at age 2 was misdiagnosed as attention-deficit/hyperactivity disorder, meaning he never got the proper treatment. That left his widowed adoptive mother overwhelmed, they said.

WHAT’S REQUIRED FOR CRUZ TO GET A DEATH SENTENCE?

The jurors will be voting 17 times — once for each victim. For the jurors to recommend a death sentence for a specific victim, they first must unanimously agree that the prosecution proved beyond a reasonable doubt that the killing involved at least one aggravating circumstance as proscribed under Florida law.

This part should not be difficult — the listed aggravating circumstances include knowingly creating a great risk of death to numerous people, committing murders that were “especially heinous, atrocious, or cruel” or committed in a “cold, calculated, and premeditated manner.” They then must unanimously agree that the aggravating factors warrant consideration of the death penalty.

They then must determine whether the aggravating circumstances “outweigh” the mitigating factors that the defense argued such as his birth mother’s drinking, his adoptive mother’s alleged failure to get him proper psychiatric care and his admission of guilt.

If they do, the jurors can then recommend a death sentence — but that’s not required. A juror can ignore the weighing exercise and vote for life out of mercy for Cruz.

A death sentence recommendation requires a unanimous vote on at least one victim. If one or more jurors vote for life on all victims, that will be his sentence.

WHAT HAPPENS IF THE JURY RECOMMENDS A DEATH SENTENCE? 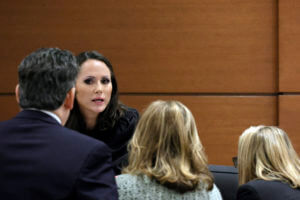 Circuit Judge Elizabeth Scherer will schedule a sentencing hearing, likely months from now. Cruz’s attorneys will have an opportunity to persuade her to override the jury and impose a life sentence, but that rarely succeeds. If sentenced to death, he will be sent to Florida’s Death Row while his case goes through appeals. It will be years before he is executed, assuming the death sentence isn’t overturned and a retrial required.

WHAT HAPPENS IF THE JURY IMPOSES A LIFE SENTENCE?

If the jury cannot unanimously agree that Cruz should be executed for at least one victim, he will be sentenced to life without parole — Scherer cannot overrule the jury. She could sentence him immediately or schedule a future hearing.

After he is sentenced, the Florida Department of Corrections would assign him to a maximum security prison where he would be part of the general population. McNeill, in her closing argument, alluded that could be an exceedingly dangerous place for someone like Cruz.