GRAND RAPIDS, Mich. (AP) — With secret recordings and other evidence, prosecutors are pledging to show how four men were united behind a wild plot to kidnap Michigan’s governor in response to her aggressive steps to slow down COVID-19 during the early months of the pandemic. 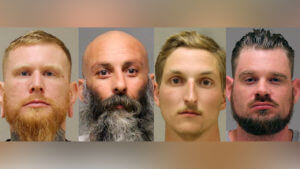 Jury selection began Tuesday for a trial that could last more than a month in federal court in western Michigan, with U.S. District Court Judge Robert Jonker telling prospective jurors: “This isn’t your average criminal case” because of the extraordinary allegations of a plot against an elected official.

Jonker emphasized that prospective jurors must put aside any personal feelings about politics, Gov. Gretchen Whitmer and her administration’s response to COVID-19 to fairly hear the case, or they cannot serve. Two men were dismissed after the judge’s questions revealed a dislike of the Democratic governor, with one man saying, “I would probably be pretty biased.”

A few other people were dismissed due to job or home conflicts, including a nurse who worked throughout the pandemic. The woman said she finally has a trip planned and “I really want to go on vacation.” A man who said he has followed news coverage of the case intensely was let go after saying, “I think they’re guilty.”

During that turbulent time, when stay-home orders were in place and the economy was restricted, Adam Fox, Brandon Caserta, Barry Croft Jr. and Daniel Harris were coming up with a plot to snatch Whitmer, prosecutors say.

They’re accused of taking critical steps over several months, including secret messaging, gun drills in the woods and a night drive to northern Michigan to scout her second home and figure out how to blow up a bridge.

The FBI, which had infiltrated the group, said it thwarted the plan with the arrests of six men in October 2020. Two of them, Ty Garbin and Kaleb Franks, have pleaded guilty and will appear as crucial witnesses for the government, giving jurors an inside view of what was planned.

Garbin, for example, said Fox, the alleged ringleader, wanted the men to chip in for a $4,000 explosive large enough to destroy a bridge near Whitmer’s home and distract police during a kidnapping.

“The blood of tyrants needs to be shed,” Garbin quoted Caserta as saying during a meeting.

Garbin and Franks insist no one in the group acted because of excessive influence by agents or undercover informants.

“It is not the end of the case for the defense, but it’s a big obstacle to overcome,” John Smietanka, a former federal prosecutor, said of the pair’s cooperation. “It’s going to come down to the credibility of witnesses plus the effect of any extrinsic evidence, like tapes.”

Indeed, prosecutors said much of the evidence will be the defendants’ own words gathered during secret recordings. The government will also offer screenshots of text messages as well as photos and videos posted on social media. 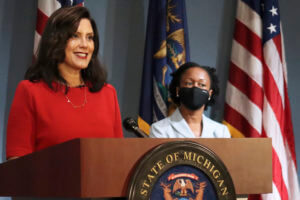 FILE – In this photo Sept. 16, 2020 file photo, provided by the Michigan Office of the Governor, Gov. Whitmer addresses the state during a speech in Lansing, Mich. Jury selection begins Tuesday, March 8, 2022, in the trial of four men who are accused of conspiring to snatch Michigan Gov. Gretchen Whitmer in a stunning scheme to retaliate against her stay-home policies and other COVID-19 restrictions during the early months of the pandemic. (Michigan Office of the Governor via AP, File)

Ahead of the trial, defense lawyers panned the case, especially the “staggering use” of informants. They deny any conspiracy to kidnap Whitmer and have signaled an entrapment defense.

Defense lawyer Christopher Gibbons said Fox did not want to kidnap Whitmer, though he made “many inflammatory remarks” about the governor and what he considered to be unconstitutional acts.

Agents and informants were the “binding force and catalyst for every event, impassioned speech and nearly every suggestion of criminality,” Gibbons said in a court filing.

“The things they recorded were the defendants’ own words. That’s what makes the defendants look guilty,” Kessler told a judge Friday.

A successful entrapment defense requires evidence that the government induced someone to commit a crime that they otherwise wouldn’t be inclined to carry out, Smietanka said.

Whitmer, who is seeking reelection this year, rarely talks publicly about the case and isn’t expected to attend the trial. After charges were filed in 2020, just weeks before the fall election, she accused Trump of “giving comfort” to antigovernment extremists with his rhetoric.

“The plots and threats against me, no matter how disturbing, could not deter me from doing everything I could to save as many lives as possible by listening to medical and health experts,” Whitmer said last summer, referring to COVID-19.

Separately, authorities in state court are prosecuting eight men who are accused of aiding the group.