Kim Kardashian has agreed to pay $1.26 million to settle Securities and Exchange Commission charges that she promoted a cryptocurrency on Instagram without disclosing that she’d been paid $250,000 to do so.

The SEC said Monday that the reality TV star and entrepreneur has agreed to cooperate with its ongoing investigation. 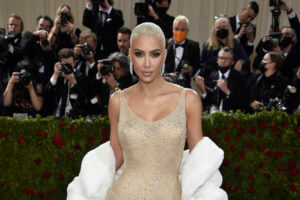 FILE – Kim Kardashian attends The Metropolitan Museum of Art’s Costume Institute benefit gala celebrating the opening of the “In America: An Anthology of Fashion” exhibition on Monday, May 2, 2022, in New York. Reality tv star and entrepreneur Kim Kardashian has agreed to settle charges brought by the Securities and Exchange Commission and pay $1.26 million because she promoted on social media a crypto asset security offered and sold by EthereumMax without disclosing the payment she received for the plug. The SEC said Monday, Oct. 3, 2022, that Kardashian has agreed to cooperate with its ongoing investigation.(Photo by Evan Agostini/Invision/AP, File)

The SEC said Kardashian failed to disclose that she was paid to publish a post on her Instagram account about EMAX tokens, a crypto asset security being offered by EthereumMax.

“The federal securities laws are clear that any celebrity or other individual who promotes a crypto asset security must disclose the nature, source, and amount of compensation they received in exchange for the promotion,” Gurbir Grewal, director of the SEC’s division of enforcement, said in a prepared statement.

Kardashian has agreed to not promote any crypto asset securities for three years.

“Ms. Kardashian is pleased to have resolved this matter with the SEC. Kardashian fully cooperated with the SEC from the very beginning and she remains willing to do whatever she can to assist the SEC in this matter. She wanted to get this matter behind her to avoid a protracted dispute. The agreement she reached with the SEC allows her to do that so that she can move forward with her many different business pursuits,” a lawyer for Kardashian said in an email.

While Kardashian is well known for reality TV, currently appearing on “The Kardashians” on Hulu, she is also a successful businesswoman. Her brands include SKIMS, which makes shapewear, loungewear and other products, and a skincare line called SKKN.

For anyone trying to promote a product, Kardashian provides a huge megaphone with 330 million followers on Instagram.

The crypto industry often uses influencers and celebrities to promote new tokens or products. Matt Damon appears in advertisements for Crypto.com, and other celebrities that have been paid to do crypto promotions include Reese Witherspoon and Gwyneth Paltrow.

Kardashian is not the first celebrity to attract the attention of financial regulators, either. In 2018 the SEC settled charges against professional boxer Floyd Mayweather Jr. and music producer DJ Khaled for failing to disclose payments they received for promoting investments in digital currency.

“This case is a reminder that, when celebrities or influencers endorse investment opportunities, including crypto asset securities, it doesn’t mean that those investment products are right for all investors,” said SEC Chair Gary Gensler. “We encourage investors to consider an investment’s potential risks and opportunities in light of their own financial goals.”

“Ms. Kardashian’s case also serves as a reminder to celebrities and others that the law requires them to disclose to the public when and how much they are paid to promote investing in securities,” Gensler added.

Cryptocurrency has attracted increasing attention from Congress as well. A bipartisan proposal that emerged last month would hand the regulatory authority over Bitcoin and Ether, two popular cryptocurrencies, to the Commodities Futures Trading Commission after wild swings in crypto valuations, dozens of scams and hundreds of billions of dollars gained and lost.

Cryptocurrencies, after soaring during the pandemic, have had a rough year as prices swing wildly, but mostly lower, and with crypto companies under intensifying scrutiny.

The token Kardashian was promoting has performed particularly poorly and is now worse less than 10% of its peak price.