MINNEAPOLIS (AP) — Jurors weighing the case of the suburban Minneapolis police officer who shot and killed Black motorist Daunte Wright asked the judge after a full day of deliberations Tuesday what they should do if they can’t reach a verdict.

Judge Regina Chu told them to continue working, as was explained in the initial instructions she gave them. The jurors resumed deliberations for about 90 more minutes, then ended for the day shortly after 6 p.m. The jury also deliberated for about five hours on Monday.

Former Brooklyn Center officer Kim Potter, who is white, is charged with first- and second-degree manslaughter. If convicted of the most serious charge, Potter, 49, would face a sentence of about seven years under state guidelines, though prosecutors have said they will seek more. 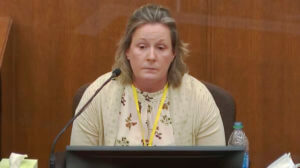 In this screen grab from video, former Brooklyn Center Police Officer Kim Potter takes questions from the prosecution as she testifies in court, Friday, Dec. 17, 2021 at the Hennepin County Courthouse in Minneapolis, Minn. Potter is charged with first and second-degree manslaughter in the April 11 shooting of Daunte Wright, a 20-year-old Black motorist, following a traffic stop in the Minneapolis suburb of Brooklyn Center. (Court TV, via AP, Pool)

Potter said she meant to use her Taser on Wright rather than her gun. Prosecutors presented evidence on the differences between the gun and the Taser, including weight, feel, size, color, and that the gun was holstered on her right side and the Taser on her left.
Prosecutor Erin Eldridge had said in her closing argument that the jurors would be able to hold both the Taser and the gun to compare them, “to get a feel for the two, and to get a sense of all those differences that you heard about in court, and see for yourselves how different they really are.”

The jurors asked if they could remove zip ties keeping former Potter’s gun in an evidence box so they could hold it, and the judge said they could. Potter attorney Paul Engh had objected, saying that the gun should remain in the box “for safety purposes.”
Jurors can also examine the Taser during their deliberations.

Chu read the jury’s question about deliberating: “If the jury cannot reach consensus, what is the guidance around how long and what steps should be taken?”

She then reread from jury instructions that the jurors should continue to “discuss the case with one another and deliberate with a view toward reaching agreement if you can do so without violating your individual judgment.”

Potter’s attorneys objected to the judge rereading that instruction, arguing that doing so inappropriately emphasized that paragraph over the rest of the instructions. Chu overruled.

Rachel Moran, a professor at the University of St. Thomas School of Law, noted that the jurors didn’t say they were at an impasse.

“Judge (Regina) Chu is going to let them keep deliberating if they don’t express concern or distress about how it’s going,” Moran said.

The judge has ordered that the jury be sequestered during deliberations — meaning they remain under the court’s supervision in an undisclosed hotel and cannot return home until they have reached a verdict or the judge has determined they can’t reach one. Her order allows them to communicate with family members as long as they avoid discussing the trial.

During closing arguments, prosecutors accused Potter of a “blunder of epic proportions” in Wright’s death in an April 11 traffic stop — but said a mistake was no defense.

Potter’s attorneys countered that Wright, who was attempting to get away from officers as they sought to handcuff him for an outstanding warrant on a weapons charge, “caused the whole incident.”

The mostly white jury got the case after about a week and a half of testimony about an arrest that went awry, setting off angry protests in Brooklyn Center just as nearby Minneapolis was on edge over Derek Chauvin’s trial in George Floyd’s death. Potter resigned two days after Wright’s death. 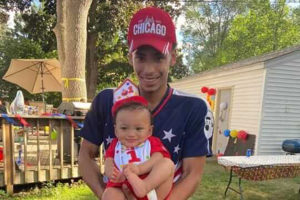 Eldridge called Wright’s death “entirely preventable. Totally avoidable.” She urged the jury not to excuse it as a mistake: “Accidents can still be crimes if they occur as a result of reckless or culpable negligence.”

Potter attorney Earl Gray argued that Wright was to blame for trying to flee from police. Potter mistakenly grabbed her gun instead of her Taser because the traffic stop “was chaos,” he said.

Potter testified Friday that she “didn’t want to hurt anybody” and that she was “sorry it happened.”

Chu told jurors that intent is not part of the charges and that the state doesn’t have to prove Potter tried to kill Wright.

The judge said for first-degree manslaughter, prosecutors must prove that Potter caused Wright’s death while committing the crime of reckless handling of a firearm. This means they must prove that she committed a conscious or intentional act while handling or using a firearm that creates a substantial or unjustifiable risk that she was aware of and disregarded, and that she endangered safety.

For second-degree manslaughter, prosecutors must prove she acted with culpable negligence, meaning she consciously took a chance of causing death or great bodily harm.
___
Associated Press writer Kathleen Foody in Chicago contributed to this story. Bauer reported from Madison, Wisconsin.