LAS VEGAS (KTNV) — Las Vegas police have released the arrest report for the man accused of shooting three people and killing two in a neighborhood known as Naked City.

Police say they received a call shortly before 12:30 a.m. on August 10, about a shooting on West Chicago Avenue. 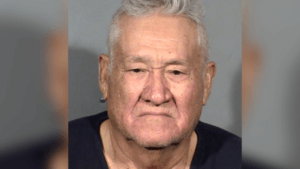 When officers arrived, they found a female lying face down outside in a driveway. The female died at the scene.

Arnoldo Lozano Sanchez, 78, who lived in the home and rented it out to various people, was arrested for the shooting.

According to a witness, Sanchez became angry a few days ago because the other three people who were living with him had not paid rent.

The witness said she suggested to Sanchez that he evict the occupants but he reportedly told the witness he would “handle this his way.”

Police also interviewed another man who lives in the house.

He told police that he was in a back bedroom when he heard several gunshots. When he looked outside his room, he saw Sanchez standing in the hallway, smiling and laughing.

Lopez’s roommate then opened his door and Sanchez reportedly began pushing his way in. He then heard his roommate yelling “No!” and a woman screaming. After that, he heard several gunshots.

A black semiautomatic handgun was found under a bush on New York Avenue.

Sanchez refused to answer any questions at police headquarters and requested an attorney.

Sanchez is facing two charges of murder and one charge of attempted murder. A Las Vegas judge ordered him on Wednesday to be held without bail and his next court appearance was set for Aug. 16.

This story was originally published August 11, 2021, by KTNV in Las Vegas, a member of E.W. Scripps Company.