LAS VEGAS (KTNV) — The 16-year-old who allegedly assaulted a teacher at a Las Vegas high school has now been charged with attempted murder, sexual assault, battery to commit sexual assault, and robbery according to the Las Vegas Metropolitan Police Department records Saturday morning. 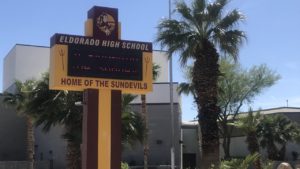 Photos show Eldorado High School in Las Vegas, Nevada. On April 8, 2022, police announced that a 16-year-old student at the school had been arrested for the attempted murder and sexual assault of a teacher. (KTNV)

On Friday, investigators with the LVMPD Sexual Assault Section determined that the teacher was in her classroom at Eldorado High School when the teenage student came in to talk about grades.

“At some point, the suspect got violent and began punching the victim and strangled her until she lost consciousness,” police said.

The student fled the classroom after the attack, police said. Another employee found the injured teacher and called 911.

Principal Christina Brockett sent an email to parents on Thursday notifying them that a staff member had been assaulted. In a new message to the school community on Friday, Brockett thanked the school staff “who helped respond to the terrible situation and helped a colleague in need.”

“We are doing everything possible to support our students, staff, and community,” she said.

“Eldorado is an amazing school with students and staff who are here to support each other,” she said. “While it will take time, we will work through this and emerge a stronger Sundevil family.”

This story was originally published April 9 by KTNV in Las Vegas, an E.W. Scripps Company.