BOISE, Idaho (AP) — A panel of Idaho lawmakers is recommending the Legislature ask Congress to fix a legal loophole that has some calling a portion of Yellowstone National Park the “Zone of Death,” where crimes could arguably go unprosecuted.

The vast majority of the 3,471-square-mile (8,990-square-kilometer) park sits in Wyoming, but about 3% of it stretches into Montana and 1% of the park is in eastern Idaho. When Congress created the park in 1872, the federal court in the District of Wyoming was given jurisdiction over the crimes committed within park borders. 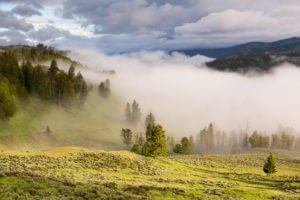 Boise Democratic Rep. Colin Nash, an attorney, told the House Judiciary and Rules Committee on Thursday that he first learned about the “zone of death” in law school. The phrase refers to a legal theory advanced by Michigan State Law professor Brian Kalt in 2005, which says a jurisdictional loophole could force the federal government to dismiss charges against anyone accused of committing a federal crime in the Idaho portion of the park.

In an academic paper titled “The Perfect Crime,” Kalt noted the Sixth Amendment says that people charged with crimes have a right to be tried by a jury of their peers, selected from the state and region where the crime took place.

Nash is sponsoring a joint memorial to formally ask Congress to close the loophole.

“No crimes have been committed, that I’m aware of, and gone unprosecuted,” Nash told the committee. “But every time there’s a high-profile disappearance in this area, I think about this — and there were two last year.”

During the months-long search for 16-year-old Tylee Ryan and her little brother, 7-year-old JJ Vallow, law enforcement authorities said they’d obtained video and photo evidence that the children had entered Yellowstone National Park with their mother Lori Vallow Daybell, but no evidence was found showing Tylee ever left the park. The bodies of both children were later found buried in the back yard of an eastern Idaho home owned by their mother’s new husband, Chad Daybell. Lori and Chad Daybell were subsequently charged with several crimes in Idaho state court.

Lori Vallow Daybell (left) is shown in a March 6, 2020, file photo. Her husband, Chad Daybell, right, listens during his preliminary hearing in St. Anthony, Idaho, on Monday, August 3, 2020. The couple are charged with concealing evidence by destroying or hiding the bodies of 7-year-old Joshua “JJ” Vallow and 17-year-old Tylee Ryan at his eastern Idaho home. (John Roark/Post Register via AP, Pool)

When 22-year-old Gabby Petito disappeared last year shortly after calling her family from Grand Teton National Park — which borders Yellowstone — theories about the “zone of death” again came to the fore. Petito’s body was found in the Wyoming portion of the park, and authorities pinned the blame on her boyfriend Brian Laundrie, who was later found dead in a Florida swamp.

Congress could change the law to make the Idaho and Montana portions of Yellowstone subject to the jurisdictions of the District of Idaho and the District of Montana. Nash’s memorial would urge Congress to do just that, at least for Idaho.

Nash acknowledged that it’s not clear if Congress will actually do anything, since it’s long been a known issue.

“We can try our darnedest,” he told the committee, prompting some rueful laughter in the room.

The committee agreed on a voice vote to recommend that the full House of Representatives approve the resolution.