FREMONT COUNTRY, Idaho (SCRIPPS) — Mark Means, the attorney for Lori Vallow, is disqualified from representing her according to a memorandum decision.

Means represented both Chad Daybell and Vallow at times, according to the court document.. Means posted on Twitter and sent a press release on April 28, 2020, stating the office represents Daybell.

On March 21, 2020, Daybell retained John Prior who works in the same building complex as Means, according to the document. The date Vallow retained Means is unknown.

The document says Vallow and Daybell visited the Madison County Jail on April 28, 2020. Daybell alluded to sharing confidential information with Means, and Daybell believed attorney/client privilege would cover him.

“The video recording also suggested Chad believed he would not have to testify against Lori if Mr. Means represented them both,” states the court document.

The document goes on to state on May 2, 2020, Means told the court during a bail reduction hearing for Vallow, he represented both Vallow and Daybell.

A search warrant was issued on June 9, 2020, on Daybell’s property. During the search, the court document says Daybell called Means before calling Prior. Daybell was charged on June 10, 2020, with two counts of felony destruction, alteration or concealment of evidence.

The court document states a conflict exists in this case because of Means’ former representation of Daybell and the timing of the representation, and “Daybell’s waiver is insufficient to overcome the risk of harm in allowing Mr. Means to remain counsel to any party connected to this case.” 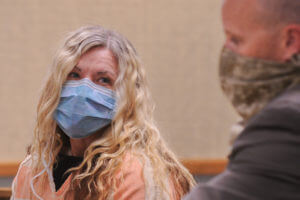 The court appointed R. James Archibald as co-counsel to Means earlier this year, as the State filed a motion objecting to the appearance of Means in the case. There were also several issues raised, including the concern Means was not death penalty certified counsel.

Since Vallow is declared indigent, she has a statutory right to appointed counsel. Archibald is a death penalty qualified public defender and was appointed co-counsel attorney on August 6, 2021.

The court’s final decision is to remove Means as counsel and continue to appointment Archibald as counsel in this case.

A motion hearing was postponed Wednesday due to the removal of Means, according to East Idaho News. The hearing was held to hear from attorneys representing IDHW and the Church of Jesus Christ of Latter-day Saints.

Archibald suggested the hearing be delayed, because he wants to speak with Vallow about the recent changes in representation, according to East Idaho News.

The trial date for both Vallow and Daybell is scheduled to begin in January 2023 in Ada County. Archibald stated in a scheduling conference earlier this month that it is unclear when Vallow will be ready for trial and cannot make decisions right now to waive her right to a speedy trial.

Vallow was deemed still not competent to stand trial in September after an updated progress report by the Idaho Department of Health and Welfare.