LOS ANGELES (AP) — A Los Angeles County-run shelter meant to be a safe space for children as they awaited placement in foster homes was for decades a den for sexual predators among the staff — and some residents — who preyed on children as young as 5, according to a lawsuit filed Thursday by dozens of former residents.

Some of the more than 30 plaintiffs spoke at a news conference and wept and trembled as they detailed abuse and some victims’ attempts to escape the hall’s barbed-wire fences and guarded gates. Among the victims was a 6-year-old boy who in 1990 was molested by a male staffer who locked the boy in a closet as punishment for screaming during the assault, according to the lawsuit. 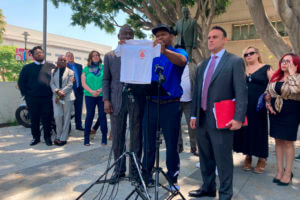 Jonathan Wright, 39, holds up the T-shirt he was given when he first went to MacLaren Children’s Center in El Monte as an 8-year-old during a news conference in Los Angeles, Thursday, June 9, 2022. He said he was sexually abused by a physician there. A Los Angeles County-run shelter meant to be a safe space for children as they awaited placement in foster homes was for decades a den for sexual predators among the staff — and some residents — who preyed on children as young as 5, according to a lawsuit filed Thursday by dozens of former residents. (AP Photo/Christopher Weber)

Jonathan Wright, 39, held up the T-shirt he was given when he first went to MacLaren Children’s Center in El Monte as an 8-year-old. He said he was sexually abused by a physician there.

“To this day, I hate being near doctors,” he said, sobbing.

Staff members often turned a blind eye to the assaults and misconduct at the facility, where children were routinely placed in solitary confinement, drugged and restrained in chairs, the lawsuit said.

(Editor’s note: This story includes discussion of sexual violence. If you or someone you know needs help, please call the National Sexual Assault Hotline at 1-800-656-4673.)

The Associated Press does not typically name victims of sexual assault unless they give their permission.

Octavia Evans said she was 12 when she was abused. She summoned the courage to report it to staff and said they took it to their boss — who was her abuser.

Now 36, Evans addressed any former MacLaren staff members who may have watched the news conference: “We were children, and we were trusting you to care for us — not hurt us.”

The lawsuit, filed Thursday in Los Angeles County Superior Court, seeks a jury trial and unspecified damages. It’s the second to be brought recently against the county in connection with the alleged sexual abuse of foster children at the facility, also known as MacLaren Hall.

The victims’ attorneys say they have more than 200 clients who claim they were abused at the facility. The lawsuit says that county officials in and out of the hall either knew or should have known of the abuse and failed to act.

“MacLaren Hall became a dumping-grounds for society’s most vulnerable, including minors without parents, or minors whose parents who were unable to care for them,” the lawsuit said. “Children were frequently removed from abusive homes and placed at MacLaren Hall only to be re-abused.”

The facility opened in 1961 and was overseen by the county’s probation department and then in 1976 was placed under the purview of the county Department of Children and Family Services. More than 20,000 kids passed through the hall before it closed in 2003.

A lawsuit was filed in May by eight women and four men, including one who was 5 in 1988 when he says he was assaulted by a male staff member in a bathroom.

Children and Family Services issued a statement declining to comment on the lawsuit but said the allegations “will be thoroughly examined.”

“Our department has many safeguards in place to protect children in our care and to hold accountable those who violate laws and policies,” the statement said.

MacLaren was shuttered in 2003 after the American Civil Liberties Union Foundation of Southern California and other organizations filed class-action lawsuits alleging inhumane treatment by staff and a failure to investigate abuse reports. An ACLU report described conditions as “Dickensian,” with children who were so neglected it amounted to “government sponsored child abuse.”

Los Angeles County settled the lawsuit with the ACLU and has paid settlements to some victims.

MacLaren failed to conduct background checks on staff prior to 2001. Once the checks were implemented, 17 staffers were found to have criminal histories that should have disqualified them from being hired, attorney Adam P. Slater said.

“It was medieval in the way it was run. … MacLaren Hall had more in common with a child prison” than a safe place for children, Slater said.

The plaintiffs were able to file lawsuits because of a California law that took effect in 2020 and suspended for three years the statute of limitations for childhood sex abuse victims to bring cases.

The statute of limitations in California for filing certain felony sexual abuse charges runs out when a child victim turns 40. The sheriff’s department — which polices county facilities — and the district attorney’s office did not immediately respond to requests for comment on whether law enforcement has initiated any criminal investigations on behalf of MacLaren victims.

The victims’ attorneys say they are not aware of a criminal investigation involving MacLaren since the mid-1980s, when five employees were arrested on suspicion of child molestation and selling drugs to children, according to the lawsuit.