SAVANNAH, Ga. (AP) — The white man who fatally shot Ahmaud Arbery after chasing the running Black man in a Georgia neighborhood says he fears he will be killed by fellow inmates if he’s sent to a state prison to serve a life sentence for murder. 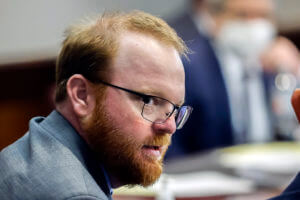 FILE – Travis McMichael looks on during the sentencing in his trial along with his father Greg McMichael and neighbor, William “Roddie” Bryan in the Glynn County Courthouse, on Jan. 7, 2022, in Brunswick, Ga. McMichael, who fatally shot Ahmaud Arbery after chasing him in a Georgia neighborhood says he’s afraid fellow inmates will kill him if he’s sent to a state prison to serve a life sentence for murder. (AP Photo/Stephen B. Morton, Pool, File)

Attorney Amy Lee Copeland argued McMichael has received “hundreds of threats” and won’t be safe in a Georgia state prison system that is under investigation by the U.S. Justice Department amid concerns about violence between inmates.

On Feb. 23, 2020, McMichael and his father, Greg McMichael, armed themselves with guns and jumped in a pickup truck to chase Arbery after he ran past their home just outside the port city of Brunswick. A neighbor, William “Roddie” Bryan, joined the chase in his own truck and recorded cellphone video of Travis McMichael blasting Arbery with a shotgun.

The killing of Arbery became part of a larger national reckoning over racial injustice amid other high-profile killings of unarmed Black people including George Floyd in Minneapolis and Breonna Taylor in Kentucky.

In Georgia, the McMichaels and Bryan were sentenced to life in prison after being convicted of Arbery’s murder in a state court last fall. They have remained in a county jail in custody of U.S. marshals since standing trial in February in federal court, where a jury convicted them of hate crimes. Each defendant now faces a potential second life sentence. 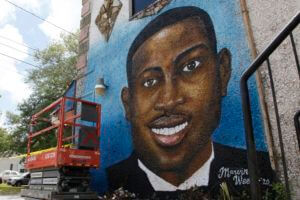 FILE – In this May 17, 2020, file photo, a recently painted mural of Ahmaud Arbery is on display in Brunswick, Ga., where the 25-year-old man was shot and killed in February. The white man who initiated the neighborhood chase that resulted in the fatal shooting of Ahmaud Arbery is asking a federal judge to show leniency when he’s sentenced next week for a federal hate crime conviction. (AP Photo/Sarah Blake Morgan, File)

Once the men are sentenced Monday by U.S. District Court Judge Lisa Godbey Wood, protocol would be to turn them over the Georgia Department of Corrections to serve their prison terms for murder. That’s because they were first arrested and tried by state authorities.

For Travis McMichael, “his concern is that he will promptly be killed upon delivery to the state prison system for service of that sentence,” Copeland wrote in her sentencing request. “He has received numerous threats of death that are credible in light of all circumstances.”

Copeland said she has alerted Georgia’s corrections agency, “which has replied that these threats are unverified and that it can securely house McMichael in state custody.”

Greg McMichael, 66, has also asked the judge to put him in federal rather than state prison, citing safety concerns and health problems.

Arbery’s family family has insisted the McMichaels and Bryan should serve their sentences in a state prison, arguing a federal penitentiary wouldn’t be as tough. His parents objected forcefully before the federal trial when both McMichaels sought a plea deal that would have included a request to transfer them to federal prison. The judge ended up rejecting the plea agreement.

FILE – This photo combo shows, from left, Travis McMichael, William “Roddie” Bryan, and Gregory McMichael during their trial at at the Glynn County Courthouse in Brunswick, Ga. Gregory McMichael, who initiated the neighborhood chase that resulted in the fatal shooting of Ahmaud Arbery, is asking a federal judge to show leniency when he’s sentenced next week for a federal hate crime conviction. (Pool, File)

“Granting these men their preferred choice of confinement would defeat me,” Arbery’s mother, Wanda Cooper-Jones, told the judge at a hearing Jan. 31. “It gives them one last chance to spit in my face.”

A federal judge doesn’t have the authority to order a state to relinquish its lawful custody of inmates to the Federal Bureau of Prisons, said Ed Tarver, an Augusta lawyer and former U.S. attorney for the Southern District of Georgia.

“She can certainly make that request,” Tarver said of the judge, “and it would be up to the state Department of Corrections whether or not they agree to do that.”

Copeland’s court filing refers to a prior agreement between the judge, prosecutors and defense attorneys to keep the McMichaels and Bryan in federal custody “through the completion of the federal trial and any post-trial proceedings.” She argued that means Travis McMichael should at least remain in federal custody through appeals of his hate crime conviction.