KENOSHA, Wis. (AP) — Jacob Blake, the Black man shot multiple times by police in Wisconsin, is paralyzed, and it would “take a miracle” for him to walk again, his family’s attorney said Tuesday, while calling for the officer who opened fire to be arrested and others involved to lose their jobs.

The shooting of Blake on Sunday in Kenosha — apparently in the back while three of his children looked on — was captured on cellphone video and ignited new protests over racial injustice in several cities, coming just three months after the death of George Floyd at the hands of Minneapolis police touched off a wider reckoning on race.

Some demonstrations devolved into unrest, including for a third night in Kenosha, where multiple gunshots could be heard in social media posts from at least one neighborhood where residents and people carrying long guns and other weapons remained in the streets hours after they city’s 8 p.m. curfew. Kenosha Police were investigating after videos appeared to show at least two people with gunshot wounds, the Milwaukee Journal Sentinel reported. 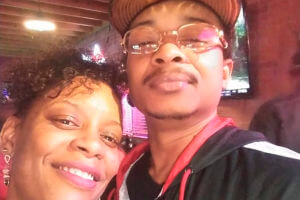 “But my son matters. He’s a human being and he matters,” said Blake’s father, who is also named Jacob Blake.

The 29-year-old was in surgery Tuesday, said attorney Ben Crump, adding that the bullets severed Blake’s spinal cord and shattered his vertebrae. Another attorney said there was also severe damage to organs.

“It’s going to take a miracle for Jacob Blake Jr. to ever walk again,” Crump said.

The legal team plans to file a civil lawsuit against the police department over the shooting. Police have said little about what happened, other than that they were responding to a domestic dispute. The officers involved have not been named. The Wisconsin Department of Justice is investigating.

Police fired tear gas for a third night Tuesday to disperse protesters who had gathered outside Kenosha’s courthouse, where some shook a protective fence and threw water bottles and fireworks at officers lined up behind it. Police then used armored vehicles and officers with shields pushed back the crowd when protesters ignored warnings to leave a nearby park.

Wisconsin Gov. Tony Evers had called for calm Tuesday, while also declaring a state of emergency under which he doubled the National Guard deployment in Kenosha from 125 to 250. The night before crowds destroyed dozens of buildings and set more than 30 fires in the city’s downtown.

“We cannot allow the cycle of systemic racism and injustice to continue,” said Evers, who is facing mounting pressure from Republicans over his handling of the unrest. “We also cannot continue going down this path of damage and destruction.” 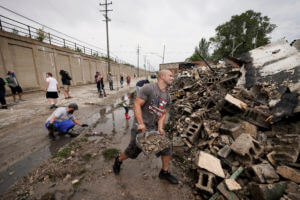 Volunteers clean up department of corrections building Tuesday, Aug. 25, 2020, in Kenosha, Wis. The building was burned during protests sparked by the shooting of Jacob Blake by a Kenosha Police. (AP Photo/Morry Gash)

Blake’s mother, Julia Jackson, said the damage in Kenosha does not reflect what her family wants and that, if her son could see it, he would be “very unpleased.”

She said the first thing her son said to her when she saw him was he was sorry.

Three of the younger Blake’s sons — aged 3, 5 and 8 — were in the car at the time of the shooting, Crump said. It was the 8-year-old’s birthday, he added.

The man who said he made the cellphone video of the shooting, 22-year-old Raysean White, said he saw Blake scuffling with three officers and heard them yell, “Drop the knife! Drop the knife!” before the gunfire erupted. He said he didn’t see a knife in Blake’s hands.

In the footage, Blake walks from the sidewalk around the front of his SUV to his driver-side door as officers follow him with their guns drawn and shout at him. As Blake opens the door and leans into the SUV, an officer grabs his shirt from behind and opens fire. Seven shots can be heard, though it isn’t clear how many struck Blake or how many officers fired.

Blake’s father told the Chicago Sun-Times that his son had eight holes in his body.

Anger over the shooting has spilled into the streets of Kenosha and other cities, including Los Angeles, Wisconsin’s capital of Madison and in Minneapolis, the epicenter of the Black Lives Matter movement this summer following Floyd’s death.

Hundreds of people again defied curfew Tuesday in Kenosha, where destruction marred protests the previous night as fires were set and businesses vandalized. There were 34 fires associated with that unrest, with 30 businesses destroyed or damaged along with an unknown number of residences, Kenosha Fire Chief Charles Leipzig told the Kenosha News. 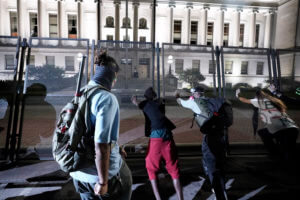 People try to push over protective fencing Tuesday, Aug. 25, 2020 in Kenosha, Wis. Anger over the Sunday shooting of Jacob Blake, a Black man, by police spilled into the streets for a third night. (AP Photo/Morry Gash)

“Nobody deserves this,” said Pat Oertle, owner of Computer Adventure, surveying the damage on Tuesday. Computers were stolen, and the store was “destroyed,” she said.

“This accomplishes nothing,” Oertle said. “This is not justice that they’re looking for.”

U.S. Sen. Ron Johnson and U.S. Rep. Bryan Steil, both Republicans, called on the governor to do more to quell the unrest. Steil said he would request federal assistance if necessary.

Evers continued to call for protesters to be peaceful.

“Please do not allow the actions of a few distract us from the work we must do together to demand justice, equity, and accountability,” he said.

“I really ask you and encourage everyone in Wisconsin and abroad to take a moment and examine your hearts,” Blake’s mother said. “Do Jacob justice on this level and examine your hearts. … As I pray for my son’s healing physically, emotionally and spiritually, I also have been praying even before this for the healing of our country.” 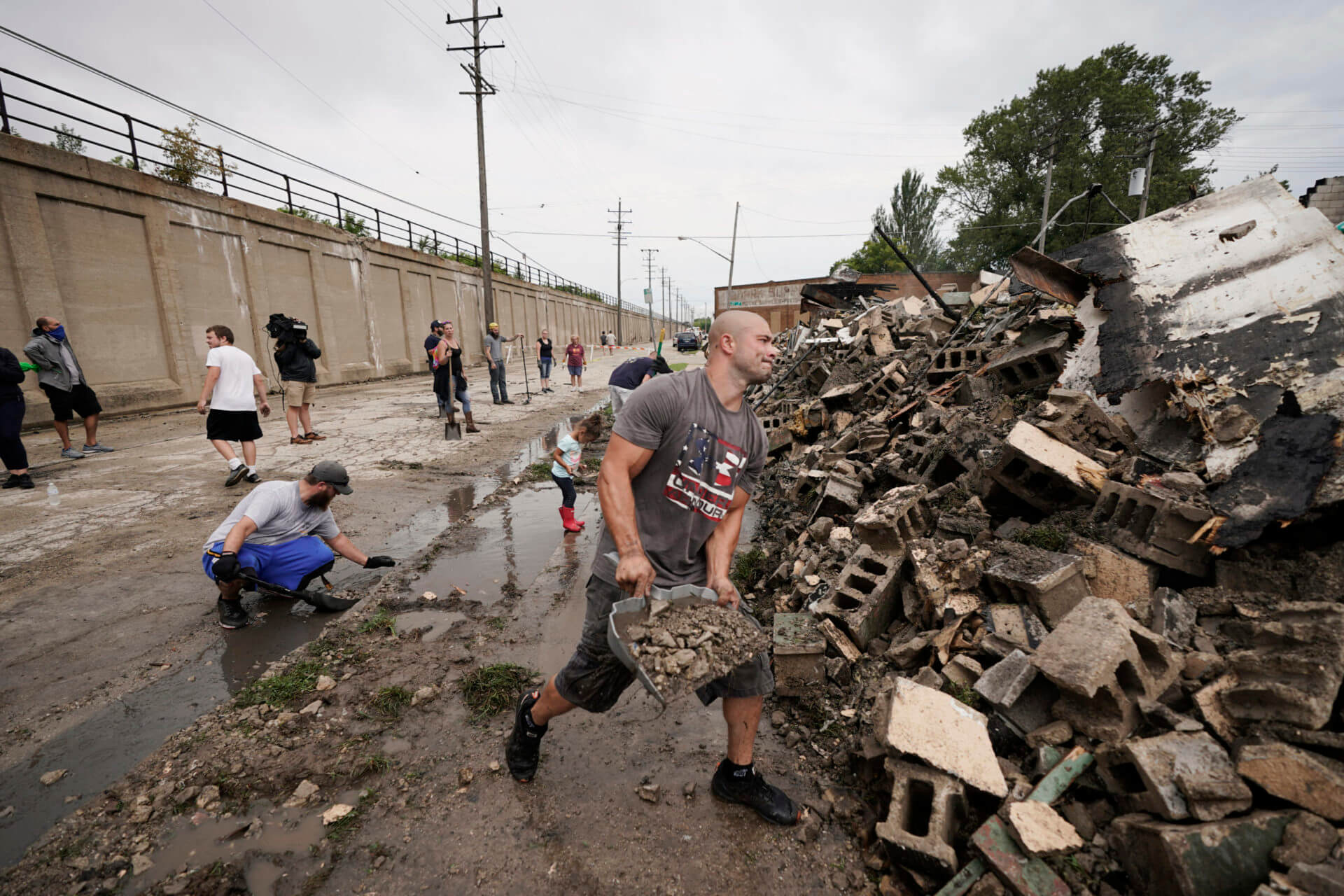 Volunteers clean up department of corrections building Tuesday, Aug. 25, 2020, in Kenosha, Wis. The building was burned during protests sparked by the shooting of Jacob Blake by a Kenosha Police. (AP Photo/Morry Gash)
MORE NEWS