JACKSON, Mich. (AP) — A judge on Thursday handed down the longest prison terms so far in the plot to kidnap Michigan’s governor, sentencing three men who forged an early alliance with a leader of the scheme before the FBI broke it up in 2020.

Joe Morrison, Pete Musico and Paul Bellar were not charged with having a direct role in the conspiracy. But they were members of a paramilitary group that trained with Adam Fox, who separately faces a possible life sentence on Dec. 27 for his federal conviction. 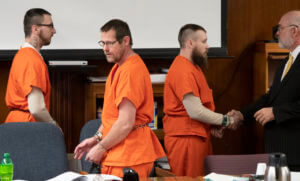 Paul Bellar, left, Pete Musico and Jospeh Morrison appear for sentencing in front of Jackson County Circuit Court Judge Thomas Wilson on Thursday, Dec. 15, 2022 in Jackson, Mich. Paul Bellar, Joseph Morrison and Pete Musico were accused of being involved in a plot to kidnap Michigan Gov. Gretchen Whitmer. The judge on Thursday handed down the longest prison terms so far in the plot to kidnap Michigan’s governor, sentencing three men who forged an early alliance with a leader of the scheme before the FBI broke it up in 2020. ( J. Scott Park/Jackson Citizen Patriot via AP)

The trio was convicted in October of providing material support for a terrorist act, which carries a maximum term of 20 years, and two other crimes.

Musico was sentenced to a minimum of 12 years in prison, followed by his son-in-law Morrison at 10 years and Bellar at seven. They will be eligible for release after serving those terms, but any decision will rest with the Michigan parole board.

Speaking in a recorded video, Gov. Gretchen Whitmer urged Judge Thomas Wilson to “impose a sentence that meets the gravity of the damage they have done to our democracy.”

“A conspiracy to kidnap and kill a sitting governor of the state of Michigan is a threat to democracy itself,” said Whitmer, who added that she now scans crowds for risks and worries “about the fate of everyone near me.”

Wilson presided over the first batch of convictions in state court, following the high-profile conspiracy convictions of four others in federal court. Fox and Barry Croft Jr. were described as captains of an incredible plan to snatch Whitmer from her vacation home, seeking to inspire a U.S. civil war known as the “boogaloo.”

Whitmer, a Democrat recently elected to a second term, was never physically harmed. Undercover FBI agents and informants were inside Fox’s group for months, and the scheme was broken up with 14 arrests in October 2020.

For Musico and Morrison, the judge took the unusual step of ordering consecutive sentences for all three crimes, which will extend their minimum prison stays. Besides supporting terrorism, the three men were also convicted of a gun crime and for being members of a gang.

Musico, Morrison and Bellar belonged to the Wolverine Watchmen. The three held gun training with Fox and shared his disgust for Whitmer, police and public officials, especially after COVID-19 restrictions disrupted the economy and triggered armed Capitol protests and anti-government belligerence.

The men expressed remorse, moments after Whitmer in her video said they had failed to take responsibility. 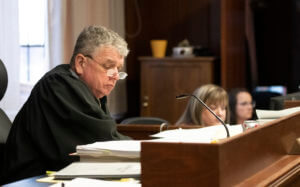 Jackson County Circuit Court Judge Thomas Wilson sentences Paul Bellar, Joseph Morrison and Pete Musico on Thursday, Dec. 15, 2022 in Jackson, Mich. Paul Bellar, Joseph Morrison and Pete Musico were accused of being involved in a plot to kidnap Michigan Gov. Gretchen Whitmer. The judge on Thursday handed down the longest prison terms so far in the plot to kidnap Michigan’s governor, sentencing three men who forged an early alliance with a leader of the scheme before the FBI broke it up in 2020. ( J. Scott Park/Jackson Citizen Patriot via AP)

Musico, 45, cried while acknowledging a “lack of judgment.” Morrison, 28, said he was “renouncing, disavowing and detesting” anti-government ideologies. Bellar, 24, was the last to speak, publicly apologizing for abhorrent remarks about the governor.

“I was caught up highly in the moment,” Bellar said. “I felt I had lost a lot of camaraderie after being discharged from the Army. That was the reason I joined the Wolverine Watchmen in the first place.”

Defense lawyers still plan vigorous appeals. They argued at trial that the men had cut ties with Fox before the Whitmer plot came into focus by late summer of 2020; Bellar had moved to South Carolina in July.

They also didn’t travel with Fox to look for the governor’s second home or participate in a key training session inside a “shoot house” in Luther, Michigan.

“If Mr. Bellar wanted to be part of the kidnapping of the governor, he would have stayed here. … He could have held on like a rock, like a tick in that apartment,” defense attorney Andrew Kirkpatrick said.

“The Wolverine Watchmen misappropriated the word ‘patriot’ all the time for a really unpatriotic objective, you know, killing fellow Americans. … Dan is what really a patriot is,” Doddamani said Thursday.

Separately, in federal court in Grand Rapids, Fox and Croft face possible life sentences this month. Two men who pleaded guilty received substantial breaks: Ty Garbin is free after a 2 1/2-year prison term while Kaleb Franks was given a four-year sentence. Brandon Caserta and Daniel Harris were acquitted by a jury.

“Croft wanted to do more than kidnap the governor of Michigan or even kill her,” Assistant U.S. Attorney Nils Kessler said in a new court filing. “He said, ‘I can’t wait for war to come to this land,’ and meant it. Only a life sentence can adequately address Croft’s crimes and deter him and others from pursuing such apocalyptic visions for our country.”

When the plot was foiled, Whitmer blamed then-President Donald Trump, saying he had given “comfort to those who spread fear and hatred and division.” In August, after 19 months out of office, Trump said the kidnapping plan was a “fake deal.”

FILE - This combo of undated booking photos provided by Alvin S. Glenn Detention Center, left, and Jackson County Sheriff's Office, show, from left, Paul Bellar, Joseph Morrison and Pete Musico. The three men who forged an early alliance with the leader of a plot to kidnap Michigan's governor will return to court on Thursday, Dec. 15, 2022, and are facing potentially lengthy sentences for assisting him in the months before the FBI broke up the cabal in 2020. (Alvin S. Glenn Detention Center and Jackson County Sheriff's Office via AP, File)
MORE NEWS