NEW YORK (AP) — The man accused of pushing a woman to her death in a New York City subway station was arraigned on a murder charge Wednesday and ordered held without bail.

Martial Simon, 61, was charged with second-degree murder in the death of Michelle Alyssa Go, who was shoved in front of a subway train in the Times Square station on Saturday. 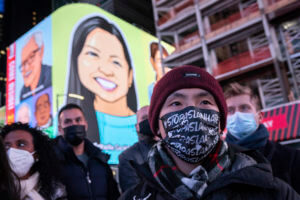 A mental fitness exam was ordered for Simon, who authorities said was on parole for a prior felony conviction at the time of the attack. His next court date is Feb. 23.

Authorities gave the defendant’s name as Simon Martial, but a spokesperson for New York County Defender Services, which is representing him, said his name is Martial Simon.

A vigil was held in Times Square on Tuesday night for Go, who was 40 years old and worked for the consulting firm Deloitte.

A prosecutor in the Manhattan district attorney’s office said the office is seeking to determine whether the attack was motivated by racial bias against Go, who was Asian American.

Simon’s attorney said there is no evidence of racial motivation.

“With so many unhoused people with unaddressed mental illness walking the streets of our city, it would be a shame if Mr. Simon was sacrificed at the altar of vengeful public opinion instead of seeking a deeper understanding of these complex issues now facing our society,” said H. Mitchell Schuman, of New York County Defender Services.