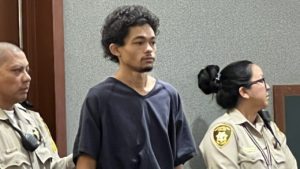 After Hampton’s defense asked for a an extension, his arraignment was rescheduled for Nov. 1 at 8:30 a.m.

There was a large police presence inside the courtroom. A representative for the Police Protective Association told 13 Action News they are calling on District Attorney Steve Wolfson to pursue the death penalty if Hampton is convicted.

Hampton made an initial court appearance Friday before a hearing master who found probable cause to keep him jailed without bail pending arraignment.

Hampton was arrested several blocks away shortly after the shooting that killed Officer Truong Thai early Thursday not far from the University of Nevada, Las Vegas, authorities said.

This story was originally published Oct. 18, 2022 by KTNV in Las Vegas, an E.W. Scripps Company.