LOUISVILLE, Ky. (AP) — A man accused of shooting at a candidate for mayor of Louisville was hit with new federal charges Thursday, the U.S. Justice Department said in a news release.

Quintez Brown, 22, was taken into federal custody and made an initial court appearance in U.S. District Court in Kentucky after a federal grand jury indicted him on charges of “interfering with a federally protected right, and using and discharging a firearm in relation to a crime of violence by shooting at and attempting to kill a candidate for elective office.” 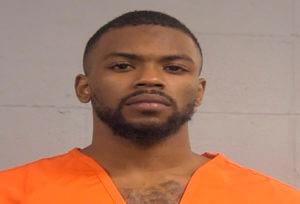 If convicted of all federal charges, Brown faces a mandatory minimum of 10 years in prison and maximum sentence of life in prison in addition to any sentence he receives on state charges of murder and wanton endangerment. He has pleaded not guilty in state court.

Jail records show that Brown has been held at the Grayson County Detention Center in Leitchfield since Wednesday.

Brown was arrested by Louisville police shortly after the Feb. 14 shooting. The mayoral candidate, Craig Greenberg, said he was not hit by the gunfire, although a bullet grazed his sweater.

Greenberg, a Democrat, said he was at his campaign headquarters with four colleagues when a man appeared in the doorway and began firing multiple rounds. One staffer managed to shut the door, which they barricaded using tables and desks, and the shooter fled.

A police report said Brown was carrying a loaded 9 mm magazine in his pants pocket and had a drawstring bag with a handgun and additional magazines when he was arrested.

Brown was placed on home incarceration and fitted with a GPS ankle monitor after a group called the Louisville Community Bail Fund paid the $100,000 cash bond on Feb 16. A judge also ordered Brown to have no contact with Greenberg or his campaign staff and barred him from possessing firearms. 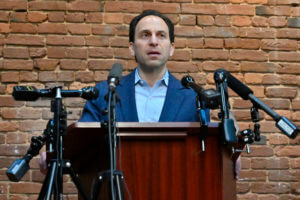 Louisville Democratic mayoral candidate Craig Greenberg speaks during a news conference in Louisville, Ky., Monday, Feb. 14, 2022. Greenberg was shot at earlier Monday in his campaign office but was not struck, though a bullet grazed a piece of his clothing, police said. (AP Photo/Timothy D. Easley)

Brown’s house arrest prompted outrage from Greenberg, who said it was “impossible to believe” Brown could be released.

The federal indictment comes after a Kentucky grand jury in Louisville last week indicted Brown on one count of attempted murder and four counts of first-degree wanton endangerment, all state charges.

Brown, a social justice activist who was running as an independent for Louisville’s metro council, disappeared for about two weeks last summer. After he was found safe, his parents issued a statement asking for patience and privacy while they attended to his “physical, mental and spiritual needs.”

In March, a judge cleared Brown to receive a mental health evaluation to determine if he should be admitted to a psychiatric hospital for treatment.

Louisville police said in February that Brown appears to have acted alone.

The federal investigation is being conducted by the FBI’s Louisville Field Office and the Louisville Metro Police Department as part of FBI Louisville’s Public Corruption Civil Rights Task Force.

The motive remains under investigation and has not been discussed publicly by authorities.

Hudspeth Blackburn is a corps member for The Associated Press/Report for America Statehouse News Initiative. Report for America is a nonprofit national service program that places journalists in local newsrooms to report on undercovered issues.