SPRINGDALE, Ohio (WCPO) — An Ohio man was arrested after inappropriately touching and kissing a 12-year-old girl at a Dave and Busters, police said.

Police were called to the restaurant arcade on Saturday for the report of inappropriate behavior. 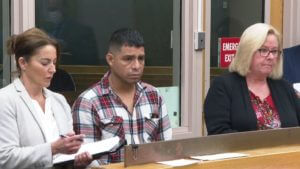 Investigators said that several Dave and Busters staff members reported seeing the two kiss and that they told officers they noticed that the 12-year-old was standing with a man in a “sexual way.”

According to court documents, a 12-year-old girl was playing a motorcycle game with her 9-year-old brother and 32-year-old Francisco Leal-Carranza was standing next to them.

When an officer started talking to the girl, Leal-Carranza began walking away. When police detained him, he told them the girl was the one who kissed him, court documents show.

According to an affidavit, a bartender told police he watched Leal-Carranza put his hand underneath the front of the girl’s shirt.

This story was originally published Oct. 10, 2022 by WCPO in Cincinnati, an E.W. Scripps Company.