LOS ANGELES (AP) — A pilot has been arrested in connection with brutal attacks on women in Southern California where he allegedly choked them into unconsciousness and assaulted them in bushes off of a running trail, prosecutors announced Monday.

Robert Yucas, 51, faces life in prison if convicted in the case filed in Orange County. Prosecutors said he raped one victim and tried to sexually assault the other two women in Aliso Viejo, a city about 50 miles (81 kilometers) south of Los Angeles.

Officials believe there may be other victims in the U.S. and abroad because of his job as an international commercial cargo pilot, Orange County Sheriff Don Barnes said Monday during a news briefing to announce the arrest. 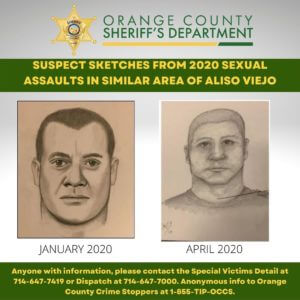 In this flyer released by the Orange County Sheriff’s Department are suspect sketches from 2020 sexual assaults in Aliso Viejo, Calif. Authorities have arrested an Army veteran in connection with brutal attacks on women in Southern California where he allegedly choked them into unconsciousness and assaulted them in the bushes off a running trail. (Orange County Sheriff’s Department)

Yucas is being held in Alaska after he was arrested in Anchorage on Thursday when he landed there following a return flight from China. His extradition to California is pending. It was not immediately clear if he had an attorney who could speak on his behalf.

Yucas is also a suspect in San Diego and Riverside counties in other crimes, Barnes said.

(Editor’s note: This story includes discussion of sexual assault. If you or someone you know needs help, please call the National Sexual Assault Hotline at 1-800-656-4673.)

The women were “indiscriminately snatched” off an Aliso Viejo running trail in 2020 and 2021 as they were skateboarding, running and walking, Orange County District Attorney Todd Spitzer said. Yucas allegedly put the women in chokeholds and dragged them into brush off the trail, prosecutors said.

“These crimes are what nightmares are made of,” Spitzer said Monday.

Investigators identified Yucas after an anonymous tipster said officials in San Diego County obtained his DNA in a separate crime, Barnes said. The sheriff did not give specifics of the San Diego County incident but said that DNA matched samples collected during two of the Orange County attacks.

In the first reported attack in Aliso Viejo, on Jan. 20, 2020, prosecutors said Yucas asked a 24-year-old woman who was skateboarding for directions. She pulled out her cellphone and Yucas attacked her, authorities said.

Prosecutors said she lost consciousness and woke up after he had raped her.

In the second reported attack in Aliso Viejo, a 32-year-old woman was out running on April 2, 2020, when Yucas grabbed her from behind and put her into a chokehold but she managed to fight him off, prosecutors said.

Last month, Yucas allegedly grabbed a 41-year-old woman as she was walking on the trail and choked her, prosecutors said. She also lost consciousness and woke up in the bushes with her pants pulled down.

“The three victims were doing simple things, enjoying life in the city of Aliso Viejo: skateboarding, running and walking on a trail,” Barnes said. “What happened to these women will change their lives forever.”

Officials said Yucas was previously a pilot in the Army but investigators do not yet have his military record. He faces charges of kidnapping, forcible rape, attempted forcible rape and assault.

Pete Sanderlin, chief operating officer at Kalitta Air, told The Associated Press that Yucas has worked for the cargo airline for about two years. Sanderlin said Yucas had passed a required background check and “his name has never come up before” for problems with the company.