DEVEREUX, Ga. (AP) — Investigators in middle Georgia have arrested a man who they say killed his roommate, cut the body into pieces and then wrapped the body parts in a plastic bag that was left in a shed behind a house.

The Union-Recorder of Milledgeville reports that the father of a man who owns the house in Devereux found the body on June 4 by following the smell of decomposing flesh to the shed, discovering the body covered in maggots. 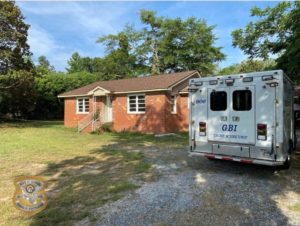 This photo provided by the Georgia Bureau of Investigation shows the scene where the remains of 29-year-old Justin Yeng Xiong were found rotting in a shed. (GBI)

The Georgia Bureau of Investigation identified the victim as 29-year-old Justin Yeng Xiong, who had been living at the Devereux house for only a short time. The town is about 40 miles (65 kilometers) northeast of Macon.

Authorities charged 33-year-old Christopher Collin Demmon this week with malice murder in the killing. Demmon had been arrested on other charges in Aiken County, South Carolina, on June 1 after deputies there found a vehicle blocking a road and Demmon walking around, acting erratically. That was three days before Xiong’s body was found.

Demmon was driving a yellow Jeep that belonged to Xiong. Putnam County Sheriff Howard Sills told WMAZ-TV that investigators found a bloody chainsaw in the back of the Jeep.

Investigators haven’t said why Demmon may have killed Xiong.