The verdict was announced shortly before noon Saturday. 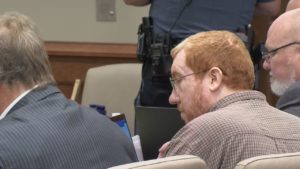 Joseph Daniels appears in court as jury deliberations continue for a second day in his trial, June 12, 2021. (WTVF)

First-degree premeditated murder and felony murder are essentially the same, with both carrying life sentences. Barring any successful appeals, Daniels will likely spend the rest of his life in prison.

The jury also returned guilty verdicts on aggravated child abuse and the lesser charges of initiating a false report and tampering with evidence.

Public Defender Jake Lockert spoke to the media after the verdict was announced and said they would be filing an appeal for a new trial. Lockert, who’s retiring soon, said he would not be leading that effort.

“In a case like this where your client confesses multiple times and makes admissions against interest multiple times, it’s a difficult case to defend,” said Lockert.

Lockert said the testimony of Joe Clyde’s half-brother  made the difference in the case.

When asked if he would have done anything differently, Lockert said he would have put on more proof for the defense. He said they had an “eyewitness” who was in the house and would have testified that what the boy said happened did not happen.

“In hindsight, we would have gone ahead and put on more proof, but at the time, we thought the best strategy was to cut the DA off so they couldn’t put on 28 more witnesses and the jury listen to phone call after phone call of our client confessing and saying things he shouldn’t be saying,” Lockert added.

District Attorney Ray Crouch did not address the media after the verdict. The Daniels family also left without speaking to reporters.

Daniels will now return to Riverbend Maximum Security prison and await a sentencing hearing, which is set for September 14.

Joe Clyde Daniels disappeared from his Dickson County home on April 4, 2018. Although the boy is presumed dead, his body has never been found. His mother, Krystal Daniels, is charged with aggravated child neglect in the case.

This story was originally published June 12, 2021, by WTVF in Nashville.