ST. LOUIS (AP) — A former pastor accused of sexually assaulting two women inside a suburban St. Louis Catholic supply store, then killing a third when she refused his sexual demands pleaded guilty Friday to first-degree murder and other charges.

Thomas Bruce’s plea came days before jury selection was to begin in a trial scheduled to start Nov. 1 for the attacks in Ballwin, Missouri, on Nov. 19, 2018. He was sentenced to a mandatory sentence of life without parole, The St. Louis Post-Dispatch reported. 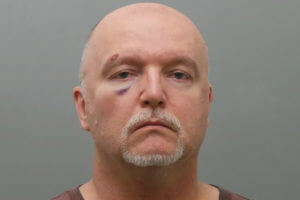 At Friday’s hearing, Bruce appeared to be practicing reading from a piece of paper he had in his hand. But after the victims read their impact statements, Bruce told the judge he had nothing to say and started to weep, KSDK-TV reported.

Bruce, now 56, was on the run for two days before his arrest, prompting some schools, churches and businesses to close.

Authorities said that Bruce, armed with a handgun, forced the three women into a back room of the store, told them to strip, exposed himself and ordered them to “perform deviant sexual acts on him,” detectives wrote in a criminal complaint.

Two of the women complied but 53-year-old Jamie Schmidt of House Springs refused, so he shot her in the head, prosecutors said. He ordered the other women to continue performing the sexual acts on him, then fled, apparently able to blend in on a busy street in broad daylight.

The two women assaulted in the store read victim impact statements Friday describing what they went through that day and in the years that have followed.

Schmidt’s husband and family members also described the pain her death has caused them.

“In a way my kids lost two parents that day. I haven’t been same since,” Schmidt’s husband said.

“The courage that they showed, the strength, I don’t know if I would have been able to do that under those set of circumstances,” Bell said. “It’s a blessing that they are still here, obviously, because it could have gone differently.”

The prosecutor at the time of the crime, Bob McCulloch, said he did not believe the store was targeted because of its religious affiliation but simply that Bruce “saw an opportunity — three women in the store alone.”

The Missouri secretary of state’s office identified Bruce as the operator of a nonprofit church formed in 2003 that was dissolved in 2007. Pastor David Fitzgerald at Calvary Chapel in Maryland Heights told The Post-Dispatch that Bruce was a pastor at Calvary Chapel of Cape Girardeau, in southeast Missouri, during that time.

Bruce also was a Navy veteran, according to his LinkedIn page.

Schmidt, of House Springs, was a married mother of three who worked as a secretarial assistant at a community college. She was active at St. Anthony of Padua Catholic Church in High Ridge and friends have said she may have been at the store to buy supplies to make rosaries for parishioners.

As part of the plea, prosecutors in Jefferson County agreed to drop separate charges of kidnapping, sexual abuse, burglary and harassment for an attack on a then-77-year-old woman just weeks before the Catholic Supply attack.

The woman was attacked at her home near Hillsboro, another eastern Missouri town not far from where Bruce lived in Imperial. She later recognized Bruce from his photo after the Catholic store attack, which led to charges in January 2019.

Jefferson County Prosecutor Trisha Stefanski said in a news release Friday the woman agreed to dropping the charges and is ready to move on from the attack. Stefanski said her office and the victim agreed that that having a mandatory life sentence without parole is “a satisfactory resolution.”
_____
Jim Salter in St. Louis contributed to this report.