DENVER (AP) — A man who says he was repeatedly sexually abused as a teen by his Catholic priest more than two decades ago filed a lawsuit against the now-defrocked priest and the Archdiocese of Denver on Thursday, taking advantage of a recently passed law that allows victims to sue even if the statute of limitations has expired.

The lawsuit targets Timothy Evans, a priest convicted in 2007 of sexually abusing other teens in two Colorado counties around the same time frame. The Vatican laicized Evans, essentially removing him from the priesthood, while he was in prison. He was paroled in 2020 with plans to live with family and find work in Grand Junction, Colorado. 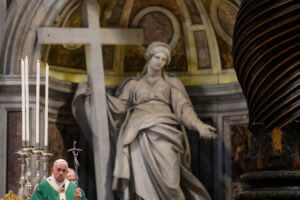 FILE – In this Oct. 10, 2021 file photo, Pope Francis holds the pastoral staff as he celebrates a mass in St. Peter’s Basilica for the opening of the bishops’ synod, at the Vatican. (AP Photo/Gregorio Borgia, file)

The lawsuit was filed in state court by Scott Verti, alleging about 100 instances of abuse while he was an altar boy at St. Elizabeth Ann Seton Church in Fort Collins from 1998 to 2003. Verti, 37, was between the ages of 13 and 18 at the time.

The filing is allowed under a 2021 Colorado law that opened up a three-year window for people to pursue litigation for sexual abuse they suffered as children dating as far back as 1960. It’s part of a nationwide effort to make it easier for victims to seek justice later in life after they have had time to come to terms with what happened.

A spokesperson for the Denver archdiocese did not immediately return a telephone call or an email seeking comment. Evans could not be located for comment.

According to CHILD USA, an advocacy group in Philadelphia, over the past 20 years about two dozen states have extended their statute of limitations, or eliminated them going forward.

Some states have allowed claims to stretch back decades, with New York, California and New Jersey among those allowing sex abuse claims to be pursued, regardless of how much time has elapsed.

Until the law was changed in Colorado, victims of childhood sexual abuse only had until the age of 24 to file lawsuits against abusers and had to file lawsuits by the time they turned 21 against employers of alleged abusers.

When he was 24, Verti said he was not in a place where he could talk about what had happened to him, let alone file a lawsuit. He said he was deep in the throes of addiction that developed as the result of the abuse. Verti alleged that Evans told him that no one would believe him if Verti reported the priest’s actions.

Verti said the abuse caused him to be diagnosed with chronic insomnia at 14 and prevented him from maintaining long-term relationships of all kinds. He said he wasn’t able to process what had happened until his mid-30s, following therapy.

“It allows me to right this regret about not coming forward,” Verti, who is now engaged, said of his lawsuit.

The Associated Press does not normally identify victims of sexual assault but Verti filed the lawsuit under his name and agreed to being identified publicly.

Evans was investigated by law enforcement after three victims stepped forward starting in 2003 — a year after the Catholic church sexual abuse scandal exploded in Boston after being exposed by The Boston Globe — to report abuse several years before. Those cases of abuse were first reported to the archdiocese, which then reported them to police in the Denver suburbs of Lakewood and Arvada as well as Fort Collins, Colorado.

Verti’s lawsuit alleges the archdiocese is at fault because it knew of the risk posed by Evans even before he was ordained a priest in 1993, citing conclusions from a 2019 review of the archdiocese’s records commissioned by Colorado Attorney General Phil Weiser. According to Weiser’s report, Evans was sent home early from the North American College in Rome after fellow students at the seminary reported that Evans made them uncomfortable and one of them later told the archdiocese’s vicar of clergy that Evans had sexually harassed him.

Evans was then assigned to complete a “carefully supervised pastoral internship” in churches in the archdiocese, where he was then accused of having inappropriate boundaries and judgment in relationships with teen boys. The supervising pastor reported this to the archbishop and the vicar of clergy but nothing was done to investigate and Evans was moved to another parish, the report on the review said.

The review, conducted by former Colorado U.S. Attorney Bob Troyer, was conducted under an agreement brokered by the attorney general’s office. The archdiocese agreed to make its files available and to pay abuse victims however much a mediator decides is appropriate. However, victims accepting those reparations were required to waive their right to sue.

One of Verti’s lawyers, Kurt Zaner, said Verti applied to use the church’s reparations and reconciliation program around Thanksgiving. However, after one meeting to discuss his case, they have not heard anything back from officials, prompting Verti to move ahead with the lawsuit, Zaner said.

“They haven’t rejected us from the program but they also haven’t accepted us,” Zaner said.