POLK CITY, Fla. (WFTS) — The Polk County Sheriff’s Office is searching for a man accused of killing his 74-year-old aunt in Florida.

The sister told deputies that she had last seen Paz early Tuesday morning before leaving for work. When she returned later that afternoon, she saw 39-year-old Aroldo Paz in the yard, and he told her Paz had left. Since Aroldo had lived with Paz and her for the last seven months, the sister didn’t think anything of it. 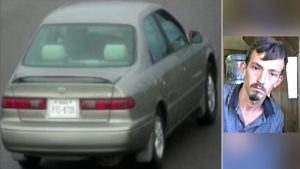 On Wednesday, after returning from work, Paz’s sister noticed that Aroldo was gone and had taken all his belongings and car from the home. She immediately called the Polk County Sheriff’s Office.

After arriving at the home, deputies began looking for Paz in the woods but were unable to locate her. Deputies were also unable to get in contact with Aroldo.

On Thursday, deputies returned to continue their search. While looking at the fence surrounding the home, a detective found a soft spot where there was “some freshly disturbed soil.”

“So he gets post hole diggers and he digs a pilot hole and pulls out a woman’s slipper,” Sheriff Judd said. “The woman’s slipper he pulls out of the ground matches the description of the shoes that Perfecta was last seen wearing. So obliviously, our homicide team gets there and they start to excavate what we now know is a gravesite.”

During the investigation, another relative told deputies that Paz “disclosed that she wanted to move out because she and Aroldo were not getting along and they were always fighting with each other.”

According to Sheriff Judd, Paz is the aunt of Aroldo and she adopted him as a child after his mother died. He added that Aroldo has no criminal history other than illegal entry into the country in 2003 from Honduras. The following warrants have been issued for his arrest:

Aroldo is believed to be driving a 1999 beige Toyota Camry with Texas license plate PTC9735. Sheriff Judd added that they have information that the vehicle was recently seen in Houston, Texas.

“The suspect may be headed to Texas, due to his previous history there. He should be considered armed and dangerous. Our homicide detectives, who are simply the best, will do everything possible to find him, bring him back, and ensure that justice is served for Perfecta Paz, and her family,” Sheriff Judd said.

Anyone with information on Aroldo’s whereabouts and wishes to remain anonymous should contact Heartland Crime Stoppers in one of four ways:

This story was originally published Oct. 15, 2021, by WFTS in Tampa Bay, an E.W. Scripps Company.