BALTIMORE COUNTY (WMAR) — A Maryland man accused of sexually assaulting at least three children at a daycare facility in Owings Mills is in custody of the Baltimore County Police.

According to police reports, James Weems, 57, was shot by his wife, 50-year-old Shanteari Weems, after at least three children said he molested them at her child daycare facility – Lil’ Kidz Kastle Daycare Center. 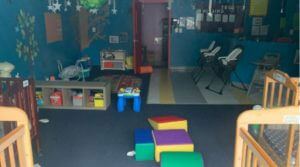 James Weems was hospitalized after he was shot by his wife inside their room at the Mandarin Oriental Hotel in Washington D.C.

Metropolitan Police say that’s when she grabbed a gun from her purse and shot James. Police ended up recovering two guns from the hotel room, in addition to a notebook that appeared to lay out Shanteari’s plans to shoot James.

James Weems faces several charges, including second-degree assault, sex abuse of a minor as well as displaying obscene material to a minor. He is being held in jail without bond.

WMAR confirmed that James is a former Baltimore City Police officer. He retired in 2005, but continued working for the department as a contract specialist until 2008.

As for Shanteari, she faces charges of assault with intent to kill.

This story was originally published August 2 by WMAR in Baltimore, an E.W. Scripps Company.