DENVER (AP) — A mentally ill man charged with killing three people and wounding eight others at a Colorado Planned Parenthood clinic in 2015 could become competent to stand trial if he is forcibly given anti-psychotic medication, a prison psychologist said Tuesday.

During a federal court hearing in Denver which Robert Dear interrupted proceedings several times with outbursts, psychologist Lea Ann Preston Baecht said there was a substantial likelihood medication would be able to treat his delusional disorder to a point where he would be able to participate in his case and help his defense. She did not think psychotherapy alone would help Dear because he does not have an understanding of his illness, which she said is mainly marked by beliefs of being persecuted by others, including former President Barack Obama and the FBI. 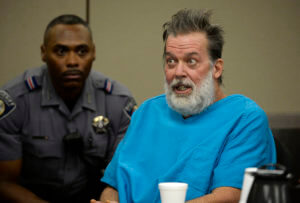 FILE – Robert Dear talks to Judge Gilbert Martinez during a court appearance in Colorado Springs, Colo., on Dec. 9, 2015. A federal judge is holding a hearing on Tuesday, Aug. 30, 2022, to determine if a mentally ill man charged with killing three people and wounding eight others at a Planned Parenthood clinic in 2015 should be forcibly medicated so he can be put on trial. (Andy Cross/The Denver Post via AP, Pool, File)

“I don’t believe there is a less intrusive option in Mr. Dear’s case,” Preston Baecht said.

Dear responded by shouting “Marijuana,” one of many comments from him during the hearing.

When Preston Baecht said she did not think there would be any side effects from the medication that would make him incompetent to stand trial or communicate with his attorneys, Dear said loudly, “Bull—-t.”

“This is my brain at stake. They want to turn me into a zombie,” he said, prompting Judge Robert E. Blackburn to issue another warning to be quiet or risk being removed from the hearing.

Previously in court, Dear has declared himself a “warrior of the babies” and said he was guilty. He made other similar statements during Tuesday’s hearing, such as “I’m glad I did what I did. Total success.”

Dear’s prosecution in state court and then federal court for the attack on the clinic in Colorado Springs has been stalled because he has been repeatedly found to be mentally incompetent to stand trial. Federal prosecutors are asking Blackburn to order that Dear be given medication against his will.

In a court filing, prosecutors said they expected Dear’s lawyers to argue that serious medical problems prevent him from being treated with antipsychotic medication. According to prison medical records, Dear has reported that he suffered a heart attack while taking such a drug years ago. But prosecutors said they could not find any record to back that up, according to a prosecution filing.

Defense attorneys have not yet presented their case during the hearing, which could continue into Wednesday.

Dear was forcibly given medication over the course of about several days during a stay at Colorado’s state mental hospital, not long enough to determine if it was effective, Preston Baecht said.

Preston Baecht said she was recommending medication for Dear based on her experience as a psychologist and studies that have done been on prisoners given medication for delusional disorder.

While being questioned by defense attorney Jennifer Beck, Preston Baecht acknowledged that delusional disorder is relatively rare and not much research has been done on its treatment as a result.

Dear, described by acquaintances at the time of his arrest as a reclusive loner, is being represented by federal public defenders who do not comment to the media on their cases.

According to state court documents, Dear told police he attacked the clinic because he was upset with Planned Parenthood for “the selling of baby parts.”

Federal prosecutors allege that Dear intended to wage “war” against the clinic because it offered abortion services, arming himself with four semi-automatic SKS rifles, five handguns, two other rifles, a shotgun, propane tanks and 500 rounds of ammunition. He allegedly began shooting outside the clinic before getting inside by shooting his way through a door, according to his federal indictment.

Two of the people killed in the attack were accompanying friends to the clinic — Ke’Arre Stewart, 29, an Army veteran who served in Iraq and was a father of two, and Jennifer Markovsky, 36, a mother of two who grew up in Oahu, Hawaii. The third person killed was University of Colorado Colorado Springs campus police Officer Garrett Swasey, who responded to the clinic after hearing there was an active shooter.

Prosecutors have ruled out seeking the death penalty against Dear, who is charged under the federal 1994 Freedom of Access to Clinic Entrances Act, and instead will seek a life sentence if he is convicted.

It’s not known when Blackburn will rule on whether Dear should be forcibly medicated.