MIAMI (AP) — A Mexican actor was convicted in South Florida on Tuesday of fatally punching a man during a road rage confrontation. 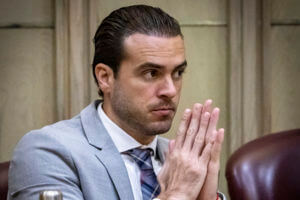 A six-person jury in Miami-Dade circuit county found Pablo Lyle, 35, guilty of manslaughter, according to court records. He faces up to 15 years in prison.

“Two lives were destroyed by simple roadway anger, a situation we see far too often on our streets and on streets across the country,” Miami-Dade State Attorney Katherine Fernandez Rundle said in a statement.

Before his arrest in the United States, Lyle starred in several Televisa telenovelas and a Netflix crime show called “Yankee.” His first major role was the lead on “La sombra del pasado.”

Lyle has claimed he acted in self-defense and was trying to protect his children in March 2019 when he punched Juan Ricardo Hernandez, 63, during a confrontation at a Miami intersection.

The unarmed Hernandez suffered a traumatic brain injury and died four days later at a hospital.