MILWAUKEE (WTMJ) — A jury has found 64-year-old Clifton Blackwell guilty of first degree reckless injury, with hate crime and use of a dangerous weapon modifiers, for throwing acid in another man’s face.

Back in 2019, police say Mahud Villalaz and Blackwell got into an argument about parking near 13th and Cleveland. 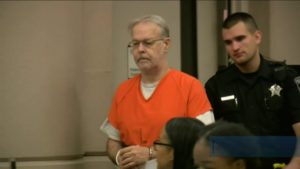 State of Wisconsin statute requires 1st degree reckless injury can carry up to 25 years in the state prison system. The hate crime and use of a dangerous weapon modifiers each can carry an extra 5 years.

The jury was made up of eight women and four men. At least one person appeared to be a person of color. The rest appeared white. They deliberated for about 5.5 hours total.

Sentencing set for May 18.

“Picking people out and attacking them because of the color of their skin or where we think they’re from is a hate crime that has no place in our country; twelve members of our community sent that message today. Mahud Villalaz thanks the jury and the police and prosecutors that worked to secure Mr. Blackwell’s conviction, and he appreciates the support of the larger community through what has been a terrible experience. Mr. Villalaz’ facial burns have healed from the acid thrown in his face; he still carries with him the bigoted hatred of that act, but also the support and empathy of his fellow American citizens. As Mr. Blackwell suggested, Mahud Villalaz is going back to his country today – the United States – knowing that justice has been served.”

“I said, why don’t you obey the laws of my country, of this country?” Blackwell testified.

Blackwell testified Villalaz approached him. That’s when Blackwell says he pulled out a can of drain cleaner, which he says he uses for protection.

Video shows they engage in conversation, and then Villalaz goes to move his truck. Video also shows he returns to talk to Blackwell.

“I sprayed a small amount of acid, just a swash,” Blackwell testified.

Defense attorneys asked Villalaz during cross examination why he returned to speak with Blackwell after moving his car.

“Why would you step closer to someone other than to intimidate them?” defense attorney Michael Plaisted asked.

“He was talking to me,” Villalaz responded.

He testified Blackwell made racist statements toward him.

The defense attorney focused on the Villalaz’s movements just before he was sprayed.

“That’s when you pretended you were going to punch him?” Plaisted asked.

“No, I never pretended that I tried to punch him any time” Villalaz responded. “I flinched. There’s a really big difference.” 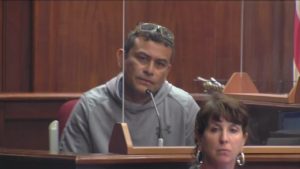 Mahud Villalaz testified in court on April 25 to tell his side of the story after acid was thrown on his face in 2019. (WTMJ)

Villalaz testified Blackwell made racist comments towards him.

“Why can’t you follow our laws? Go back to your country,” Villalaz testified.

He testified he responded to Blackwell, “You don’t know my status. I have the right to be here.”

Villalaz emigrated from Peru to the United States and is a citizen.

He says he was out that night getting food. Once he encountered Blackwell, he moved his car. He says he came back and the conversation continued.

“Did you ever advance towards him?” the prosecutor asked during cross examination.

Prosecutors showed the jury surveillance video they say shows the moment Blackwell threw the acid. It also shows Villalaz running inside a nearby restaurant for help.

He suffered second degree burns and spent two days in the hospital.

Blackwell was arrested a few days later. His defense team says the evidence will show Blackwell acted in self-defense. They say he was waiting for the bus after getting groceries when Villalaz came up to him.

“He was pretending, as he told the police, he was pretending to punch him,” said defense attorney Michael Plaisted in opening statements. “That’s why this happened. That’s why he had acid thrown in his face.”

“Mr. Blackwell thought his person was going to be interfered with,” Plaisted said. “I think the evidence will show he had the right to defend himself with whatever he had.”

This story was originally published April 28 by WTMJ in Milwaukee, an E.W. Scripps Company.