MINNEAPOLIS (AP) — The city of Minneapolis has reached a $600,000 settlement with 12 protesters who were injured during demonstrations after the May 2020 police killing of George Floyd, the American Civil Liberties Union announced Wednesday.

The agreement, which also includes numerous reforms, was accepted the same day by a federal judge, making it official after the city approved it in October. 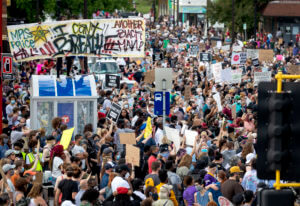 FILE – Protesters gather calling for justice for George Floyd gaterh on May 26, 2020, in Minneapolis. The American Civil Liberties Union announced Wednesday, Nov. 30, 2022, that the city of Minneapolis reached a $600,000 settlement with 12 protesters who were injured during demonstrations after the May 2020 police killing of Floyd. (Carlos Gonzalez/Star Tribune via AP, File)

The settlement includes an injunction that bars the city from arresting, threatening to arrest or using physical force — including chemical sprays, flash bang or concussion grenades and foam tipped bullets — against people who are engaging in lawful protests. It also limits officers’ use of chemical agents to disperse peaceful demonstrators. And it requires that officers have their body cameras recording and unobstructed while at protests, according to the ACLU.

The money will be split among the plaintiffs.

Floyd, a Black man, was killed on May 25, 2020, when then-Officer Derek Chauvin, who is white, knelt on his neck for 9 1/2 minutes during an arrest. Video of the restraint was recorded by a bystander and viewed around the world, sparking global protests as part of a broader reckoning over racial injustice.

In Minnesota, the protests lasted for days. While most demonstrators were peaceful, some damaged buildings and set fires, even burning a police station.

Two lawsuits filed in 2020 and later consolidated accused Minneapolis police of using unnecessary and excessive force against protesters. They alleged that police used tear gas as well as foam and rubber bullets to intimidate them and quash the demonstrations, and also that officers often fired without warning or giving orders to leave.

The plaintiffs’ injuries included bruising from less-lethal munitions, lingering respiratory issues from tear gas and psychological trauma that has chilled their desire to protest in the future, the ACLU said.

“Tear gas, foam bullets and pepper spray became weapons for intimidating and hurting protesters, making it dangerous for people to exercise their First Amendment rights,” ACLU-MN legal director Teresa Nelson said in a statement. “We hope this settlement sends a message to law enforcement across Minnesota that this violation of our constitutional rights will not be tolerated.”