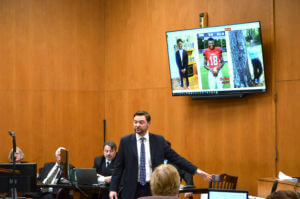 MAGNOLIA, Miss. (AP) — A Mississippi man was given four death sentences by a jury on Thursday, hours after he spoke in court and blamed the devil for his actions the night eight people were shot to death.

Capital murder is punishable by the death penalty, but jurors must agree unanimously to set that as the punishment. Without unanimous agreement, the judge would set sentences of life in prison.

The unanimous decisions for the death penalty were handed down after the same jurors who convicted Godbolt heard testimony from several people Wednesday and Thursday during the penalty phase of the trial, the Daily Leader reported.

Godbolt gave a rambling speech full of religious references in court Thursday, and at one point a spectator seated among the victims’ families yelled at him to shut up, the Enterprise-Journal reported. 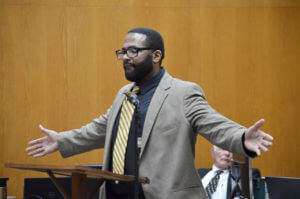 Godbolt said he had prayed to be a better man, “but the devil came to kill and destroy. He wasn’t going to let that be.”

On Wednesday, jurors heard from victims’ relatives, including the widow of a deputy sheriff who was shot to death while responding to a domestic disturbance call and the mother of a teenager who was slain at another home.

Investigators said that on May 27, 2017, Godbolt went to his in-laws’ home and argued with his estranged wife about their children. The deputy, Godbolt’s mother-in-law and two other people were killed there. In the early hours of the next day, two young people were killed in a second house, and a married couple was killed in a third house.

“My life came to a screeching halt,” Godbolt said earlier Thursday, describing that night. “I couldn’t fight the battle that was raging inside me.”

He quoted words spoken by Jesus on the cross: “’My Lord, My Lord, why hast thou forsaken me?’”

He said he thought his daughter was in in danger from other relatives, and a woman in the audience screamed; “Cory, just shut up! Just stop!”

Circuit Judge David Strong halted proceedings and family members were led out of the courtroom.

Dr. Matt Mendel, a clinical psychologist from Raleigh, North Carolina, had testified Thursday that he interviewed Godbolt and several of his relatives on behalf of the defense. When Godbolt was 17, his stepmother shot and killed his father, which “led to enormous anger and resentment, especially toward women,” Mendel said.