LOS ANGELES (AP) — A 14-year-old was shopping for Christmas clothes last week with her mother when the pair heard screams and hid in a dressing room, where the girl was fatally shot by Los Angeles police after an officer fired a rifle at a suspect and a bullet pierced a wall, the family said Tuesday.

Valentina Orellana-Peralta died in her mother’s arms last Thursday at a Burlington store in the San Fernando Valley’s North Hollywood neighborhood. Her family said the teen loved skateboarding and had dreams of becoming an engineer to build robots.

After screams broke out in the store the day before Christmas Eve, the teenager locked the dressing room door.

“We sat down on a seat, holding each other, praying, when something hit my daughter, Valentina, and threw us to the floor,” Soledad Peralta said Tuesday. “And my daughter died in my arms. I couldn’t do anything.”

The teen’s family stood outside Los Angeles Police Department headquarters on Tuesday, next to a large photo of Orellana-Peralta wreathed in flowers, to call for justice and remember their daughter.

Speaking in Spanish and choking back tears as sirens wailed in the background in downtown LA, they said they had left Chile to get away from violence and injustice in search of a better life in the U.S. 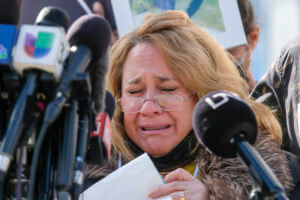 Soledad Peralta, mother of Valentina Orellana-Peralta, speaks during a news conference outside the Los Angeles Police Department headquraters in Los Angeles, Tuesday, Dec. 28, 2021. The parents of Valentina Orellana-Peralta, the 14-year-old girl killed by a stray bullet fired by an LAPD officer at a North Hollywood clothing store last week, and their attorneys held a news conference to discuss the family’s demand for transparency from the Los Angeles Police Department. (AP Photo/Ringo H.W. Chiu)

The LAPD on Monday posted an edited video package online that included 911 calls, radio transmissions, body camera footage and surveillance video from the Thursday shooting at a store crowded with holiday shoppers. The department’s policy is to release video from critical incidents, such as police shootings, within 45 days.

The family’s attorneys — including civil rights lawyer Ben Crump — have sent a letter to the LAPD asking for more video.

Surveillance video showed the suspect attacking two women, including one who fell to the floor before he dragged her by her feet through the store’s aisles as she tried to crawl away.

Multiple people including store employees called police to report a man striking customers with a bike lock. One caller told a 911 dispatcher that the man had a gun. No firearm — only the bike lock — was recovered at the scene.

The early surveillance footage showed a man carrying a bicycle up the store’s escalator to the second floor, where he wandered around, seemingly disoriented, clutching a cable-style bike lock. At times he stood motionless, staring into the distance.

The footage later showed the man on the down escalator attacking a woman, who managed to escape his grip and run out of the store.

The man then left the store for a minute and a half, police said. After he returned, according to the video, he repeatedly beat a woman with a bike lock while she cowered on the floor. As she tried to escape, he dragged her through the aisle toward the dressing rooms.

In bodycam video, armed officers entered the store and approached the suspect. One held a rifle and pushed to the front of the pack as the officers went through the store in formation.

Other officers repeatedly said “slow down” and “slow it down” as the officer with the rifle moves forward.

“She’s bleeding!” an officer shouted as they encountered the victim, crawling on the blood-stained floor. The suspect was on the other side of the aisle.

“Hold up! Hold up!” another officer screamed just before three shots rang out.

The 24-year-old suspect, Daniel Elena Lopez, died at the scene. Soledad Peralta’s screams can be heard in the video.

“At this preliminary phase of the investigation, it is believed that the victim was struck by one of the rounds fired by an officer at the suspect,” police Capt. Stacy Spell said in the posted video. Police believe the bullet skipped off the floor and struck the dressing room wall.

The California Department of Justice is also investigating.

“We at the LAPD would like to express our most heartfelt condolences and profound regret for the loss of this innocent victim, Valentina Orellana-Peralta. There are no words that can describe the depth of the sorrow we feel at this tragic outcome,” Spell said in the video.

LAPD officers have shot people 38 people — 18 of them fatally, including the shooting Sunday of a man with a knife — in 2021, according to the Los Angeles Times. Those figures mark a dramatic rise in cases where officers shot or killed people in either of the last two years.

Mourners left flowers and a votive candle outside the store on Christmas in a memorial for Orellana-Peralta. Her family said she earned good grades, even though English was her second language and she’d only been in the U.S. for about six months. 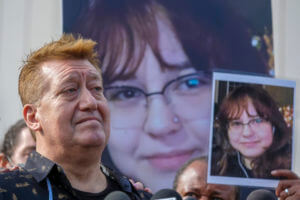 Juan Pablo Orellana Larenas, father of Valentina Orellana-Peralta, speaks during a news conference outside the Los Angeles Police Department headquaters in Los Angeles, Tuesday, Dec. 28, 2021. The parents of Valentina Orellana-Peralta – the 14-year-old girl killed by a stray bullet fired by an LAPD officer at a North Hollywood clothing store last week, and their attorneys held a news conference to discuss the family’s demand for transparency from the Los Angeles Police Department. (AP Photo/Ringo H.W. Chiu)

Her father, Juan Pablo Orellana Larenas, already had purchased tickets to relocate to the U.S. when he learned of his daughter’s death. They were planning to go to an NBA basketball game — she was a fan of star LeBron James — and see a favorite band perform, he said.

Orellana Larenas held up a brand-new skateboard, still in its plastic wrapping, that his daughter had ordered online. It was delivered after she died.

The family plans to leave the skateboard at her grave “so that she can skate with the angels,” her father said.

The Times reported that Elena Lopez’s previous criminal history includes convictions for car theft, carrying a loaded gun in public and carrying a gun as a felon. Authorities would not release his history in the state prison system, citing the ongoing investigation.

The woman who was assaulted had moderate to serious injuries, including wounds to her head, arms and face. She has not been named publicly.

LAPD officers also killed a bystander in 2018, during a gunfight with a suspect at a Trader Joe’s market. Police fatally shot killed Melyda Corado, 27, the assistant store manager, as she ran toward the store’s entrance. Prosecutors found two police officers acted lawfully when they returned the suspect’s gunfire. 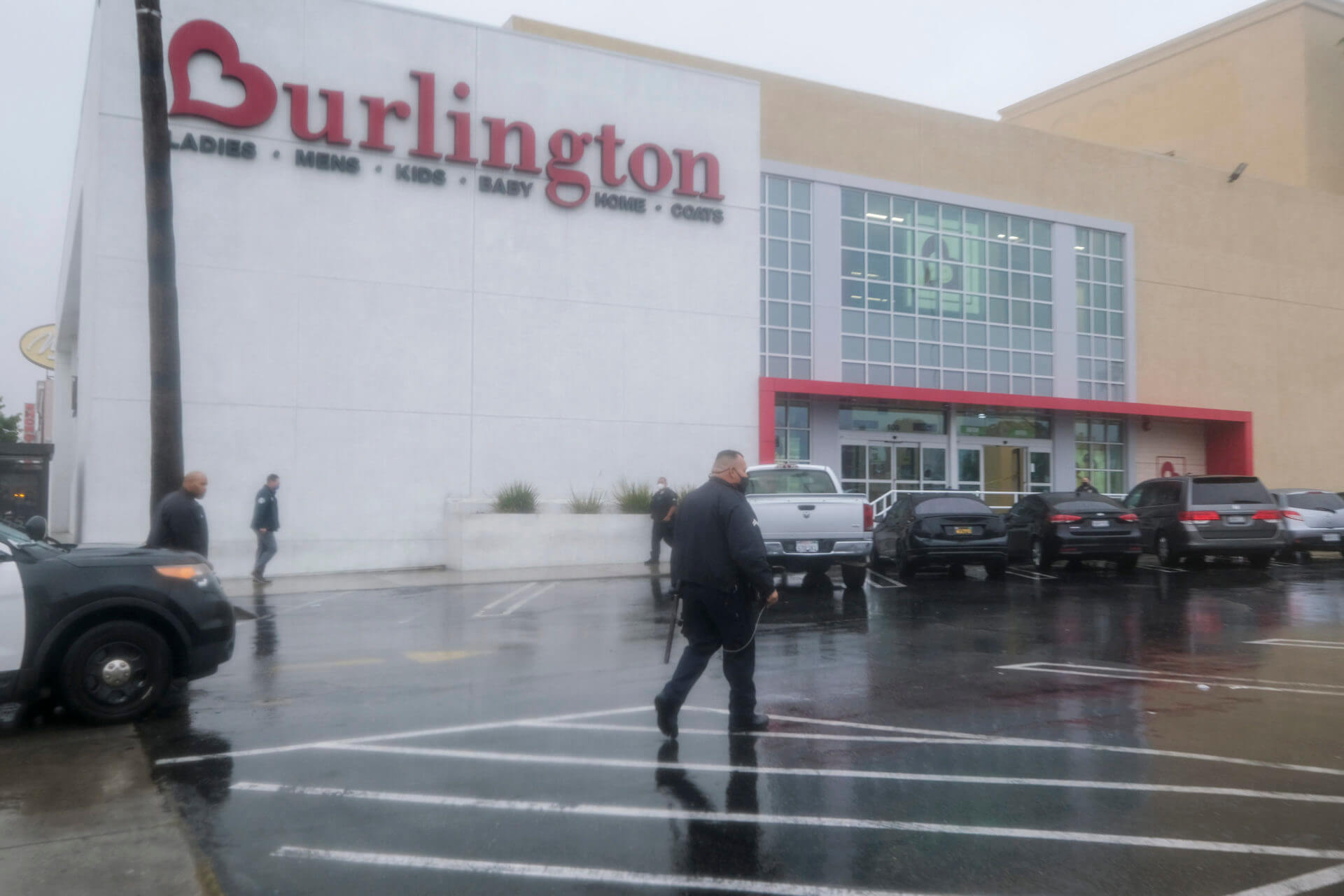 Police officers work at the scene where two people were struck by gunfire in a shooting at a Burlington store — part of a chain formerly known as Burlington Coat Factory in North Hollywood, Calif., Thursday, Dec. 23, 2021. (AP Photo/Ringo H.W. Chiu)
MORE NEWS