HONOLULU (AP) — A woman was expected to be sent from Hawaii to Idaho on Wednesday to face charges in the disappearance of her young son and teenage daughter.

Lori Vallow was arrested last month in Hawaii on Idaho felony charges of child abandonment in a bizarre case that has attracted worldwide attention with revelations of her doomsday beliefs, a series of mysterious deaths and two children who have been missing for about six months.

Vallow appeared briefly in a courtroom on the island of Kauai, where Kauai Prosecuting Attorney Justin Kollar told a judge that Idaho authorities would be returning her to the state later Wednesday.

Defense attorney Craig De Costa said in court that Vallow should not be questioned without an attorney “during the transit, while waiting for the plane, or when they land in Idaho.”

She is being held on $5 million bail, and her first court appearance in Idaho is Friday.

Her children, 7-year-old Joshua “JJ” Vallow and 17-year-old Tylee Ryan, have not been seen since September. Police in the city of Rexburg, Idaho, have said they “strongly believe that Joshua and Tylee’s lives are in danger.”

Police also have said Vallow, 46, and her husband, Chad Daybell, have lied about the children’s whereabouts.

The tangled case includes investigations into three deaths. Vallow’s estranged husband, Charles Vallow, was shot and killed in Phoenix last July by her brother, Alex Cox. Cox, who claimed the shooting was in self-defense, died of unknown causes in December. 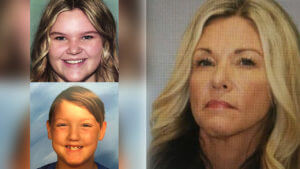 Vallow moved her family from Arizona to Idaho in August. In October, Chad Daybell’s wife, Tammy Daybell, died of what her obituary said was natural causes. When Daybell married Vallow roughly two weeks after Tammy Daybell’s death, law enforcement became suspicious and had her remains exhumed.

Test results on Daybell’s remains and toxicology results from Cox have not yet been released.

Rexburg police questioned Daybell and Vallow about the missing children in late November, and when detectives returned the next day for a follow-up interview, the couple had left town.

In December, Idaho authorities asked police in Hawaii for help finding the couple. On Jan. 26, Kauai police served a search warrant on a vehicle and condo the couple were renting in the resort town of Princeville.

Vallow reportedly believes she is “a god assigned to carry out the work of the 144,000 at Christ’s second coming in July 2020,” according to divorce documents Charles Vallow filed before his death.

She and Chad Daybell were involved in a group that promotes preparing for the biblical end times.