LAS VEGAS (AP) — A Nevada psychologist accused of killing his attorney wife with prescription painkillers and antifreeze has taken a plea deal that avoids a murder trial in a seven-year saga stemming from what authorities at first believed was a suicide.

Gregory “Brent” Dennis, 59, is expected to be sentenced to three to 10 years in prison for his voluntary manslaughter conviction in the death of Susan Winters, the Las Vegas Review-Journal reported.

Dennis on Tuesday entered a so-called Alford plea that acknowledged that prosecutors had evidence to prove his guilt but avoided a guilty plea, according to court records. His trial had been scheduled to begin next month. 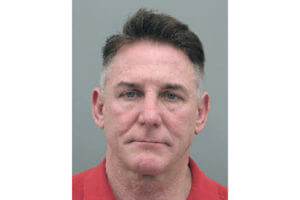 FILE – This undated file booking photo provided by the Henderson Police Department shows Gregory Brent Dennis. The Nevada psychologist accused of killing his attorney wife, Susan Winters, with prescription painkillers and antifreeze in 2015 has taken a plea deal that avoids a murder trial. The Las Vegas Review-Journal reports that Dennis on Tuesday, Jan. 4, 2022, entered a plea that avoided a guilty plea but acknowledged evidence could prove his guilt. He’s expected to be sentenced in May. (Henderson Police Department via AP, File)

He is due for sentencing May 10 before Clark County District Court Judge Michelle Leavitt.

“Brent Dennis resolved this case without making any admission of guilt in order to eventually return his life to normalcy,” defense attorney Richard Schonfeld said in a statement.

Winters, a part-time North Las Vegas judge, was found dead in January 2015 in the couple’s home in suburban Henderson.

Her death initially was ruled a suicide with a lethal amount of prescription painkillers and antifreeze, but Review-Journal articles raised questions about that finding and the Clark County coroner’s office changed the manner of death to undetermined.

Investigators later determined that Dennis lied about his wife’s death and had a financial motive to kill her, according to his arrest report. He was arrested in February 2017 and remained free on $250,000 bail.

DiGiacomo said that at the time of Winters’ death, the couple was on the verge of separation and Dennis was dealing with a cocaine addiction that was draining his finances.

Dennis stood to inherit about $2 million, including a $1 million life insurance policy, upon his wife’s death.

DiGiacomo said that after Winters took opioids, Dennis waited to call 911 and issued a do-not-resuscitate order for her at a hospital.

Shortly after Winters died, Dennis deposited into his bank account $180,000 that he later told a friend he obtained from his wife’s account because he knew her parents would freeze her assets.

“The problem for Mr. Dennis is, he knew some nine hours before her death that she was going to be dead,” DiGiacomo told the Review-Journal.