MEMPHIS, Tenn. (AP) — Family members of a slain woman and her daughter sat through a gruesome crime scene video that played in a Tennessee courtroom Monday — images of two blood-soaked bodies lying stabbed to death in awkward positions on the floor of their apartment, a knife resting next to the little girl’s foot.

Just feet away, the man convicted in the fatal stabbings 34 years ago, Pervis Payne, sat motionless as the footage showed the mother lying on her back and her daughter on her stomach, lifeless and awash in red. 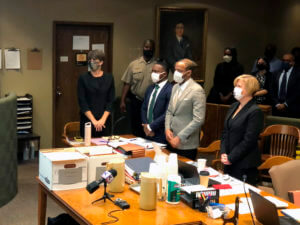 Former death row inmate Pervis Payne, at table, second from right, stands as a judge enters a courtroom, Monday, Dec. 13, 2021, in Memphis, Tenn. Payne faces two terms of life in prison after his death sentence was vacated when he was found to be intellectually disabled by court experts. (AP Photo/Adrian Sainz)

The video was entered into evidence during a sentencing hearing in the case of Payne, who received the death penalty for the 1987 killings of Charisse Christopher and her 2-year-old daughter, Lacie Jo, but was removed from death row after court experts found him intellectually disabled.

Shelby County Criminal Court Judge Paula Skahan heard testimony from family and friends of Payne, who will be sentenced to two terms of life in prison by Skahan, the same judge who vacated his death sentence Nov. 23.

Skahan must decide whether Payne, 54, will serve the terms consecutively or concurrently. The distinction is significant. A ruling for the life terms to be served one after the other — or consecutively — would mean Payne would not be eligible for parole until he is 85 years old.

Should the judge decide that Payne can serve the sentences concurrently — or at the same time — Payne would be eligible for parole in just six years.

Essentially, the judge will decide whether Payne is a danger to society, his lawyer, Kelley Henry, told the judge. The hearing was set to continue Tuesday.

Payne was convicted on murder charges and sentenced to death in the deaths of Christopher and Lacie Jo in the Memphis suburb of Millington. Christopher’s son, Nicholas, who was 3 at the time, also was stabbed but survived.

Payne, who is Black, has always maintained his innocence. He told police he was at Christopher’s apartment building to meet his girlfriend when he heard the mother, who was white, screaming and tried to help. He said he panicked when he saw a white policeman and ran away. 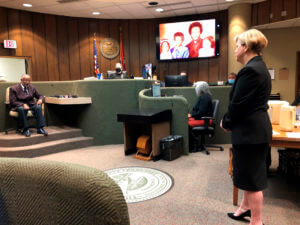 Attorney Kelley Henry, right, questions Carl Payne, seated, far left, during a sentencing hearing for his son Pervis Payne, Monday, Dec. 13, 2021, in Memphis, Tenn. Pervis Payne faces two terms of life in prison after his death sentence was vacated when he was found to be intellectually disabled by court experts. Also pictured is a photo of Carl Payne, Pervis Payne and his two sisters that was shown in the courtroom. (AP Photo/Adrian Sainz)

During his trial, prosecutors alleged Payne was high on cocaine and looking for sex when he killed Christopher and her daughter in a “drug-induced frenzy.” Shelby County district attorney Amy Weirich has said the evidence overwhelmingly points to Payne as the killer. Her office initially contested the intellectual disability claims, but backed off after he was found mentally disabled.

Executions of the intellectually disabled were ruled unconstitutional in 2002, when the U.S. Supreme Court found they violate the Eighth Amendment’s ban on cruel and unusual punishment.

But until Republican Gov. Bill Lee signed a bill this summer making Tennessee’s law retroactive in prohibiting the execution of the intellectually disabled, Tennessee had no mechanism for an inmate to reopen a case to press an intellectual disability claim. Payne’s lawyers have said the new law was critical in freeing Payne from death row.

The case has drawn national attention from anti-death-penalty activists and includes the involvement of the Innocence Project, which argues for the use of DNA testing in cases claiming wrongful conviction. DNA tests failed to exonerate Payne.

Payne had been scheduled to be put to death last December, but the execution was delayed after the governor granted him a reprieve because of the COVID-19 pandemic.

During Monday’s hearing, Payne’s supporters testified he was a kind, helpful person who liked to dance with his sister, cut his neighbors’ grass, give parishioners rides to the church where his father was a pastor, play drums in the church band, and served as a model inmate at the maximum security prison in Nashville where he has been held.

They also testified that Payne was born premature, had trouble reading and was excused from speaking during class and Sunday school because of his learning problems.

Payne’s sister, Rolanda Holman, said her brother was “just a nice, kind guy,” and she recalled that she never saw him get angry. His father, Church of God in Christ pastor Carl Payne, said his son “was a bit slow,” but he was a hard worker.

“He was a person who had the gift of helps,” said Carl Payne, 79. “He was always helping somebody.”

Prosecutor Steve Jones asked Carl Payne if he knew if his son did cocaine. Carl Payne, who lived with his son in the family home until his arrest, said he did not ever see his son high on cocaine.

Before the witness testimony, most people in the courtroom watched the crime scene video in rapt silence. Some of Christopher’s relatives closed their eyes and bowed their heads to avoid seeing the graphic footage.