WILMINGTON, N.C. (AP) — A woman accused of trying to poison her husband and stepson was caught on video spiking a drink with paint thinner and cleaning products, prosecutors said Wednesday. 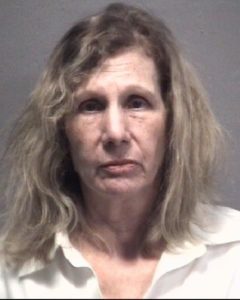 Susan McNair, 72, was arrested by Wilmington police on Tuesday on two counts of attempted first-degree murder and two counts of contaminating food or drink with a controlled substance, news outlets reported.

During her court appearance on Wednesday, prosecutors said McNair’s 85-year-old husband and 43-year-old stepson began noticing their drinks tasted odd and made them sick, so they set up a hidden security camera. According to prosecutors and a statement from police, the video recorded on July 28 captured McNair putting carpet cleaner, paint thinner and disinfectant into a glass of sweet tea.

McNair was jailed on an $300,000 bond, and her case was assigned to the public defender’s office, but she hadn’t been assigned an attorney as of Wednesday afternoon, according to the clerk of court’s office.

McNair admitted in court that she and her husband are separated and live at different residences. Prosecutors also said McNair’s husband is seeking a divorce.