A former Minneapolis police officer involved in George Floyd’s arrest told investigators that he was focused on crowd control and minimized his role in the actions that led to Floyd’s death, video of the interview shows.

Tou Thao, one of four former officers charged in Floyd’s death, described himself as a “human traffic cone” as he held back onlookers who became increasingly horrified at the police officers’ actions, the Star Tribune reported, citing video that was released Friday. Floyd, a handcuffed Black man, died after a white officer, Derek Chauvin, pressed his knee against Floyd’s neck for nearly eight minutes on May 25 as Floyd repeatedly said he could not breathe and as bystanders pleaded with officers to help him.

“I don’t want anyone to die,” Thao told an investigator who asked what his reaction was to Floyd’s death. “It was kind of a somber moment, especially for me. My heart kind of sank.”

Thao voluntarily participated in the 1-hour, 40-minute interview with the Minnesota Bureau of Criminal Apprehension eight days after Floyd’s death. He said that as the bystanders got louder, he became worried they might rush Chauvin and two other officers who were holding Floyd on the ground. 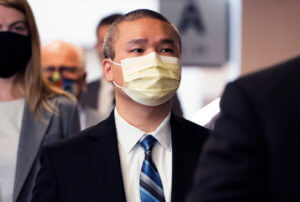 FILE – In this July 21, 2020 file photo, former Minneapolis police officer Tou Thao is flanked by his attorneys as he arrives at the Hennepin County Courthouse before a motions hearing in Minneapolis. Newly released video shows the former Minneapolis police officer involved in George Floyd’s death telling investigators that he was focused on crowd control, minimizing his role in the actions that led to Floyd’s death. Thao is one of four former officers charged in Floyd’s death (Evan Frost/Minnesota Public Radio via AP, File)

Thao and Chauvin had responded to the scene to help two officers, Thomas Lane and J. Kueng, who were attempting to arrest Floyd for allegedly passing a counterfeit $20 bill at a convenience store.

While they were on the way, Thao said that dispatch canceled the backup call. But Thao, who was driving, said he felt compelled to respond because Lane and Kueng were new officers and the intersection was known to be “especially hostile” to police.

Thao said Floyd appeared to be on drugs, resisted arrested and used his legs get out of a squad car. As the officers restrained Floyd on the ground, Thao said he heard Floyd say he couldn’t breathe, adding, “but then he was obviously yelling and talking.”

Thao also said he has never used the maneuver that Chauvin used to pin Floyd to the ground.

Although a woman who identified herself as a Minneapolis firefighter approached Thao and demanded that officers check Floyd’s pulse, Thao told investigators that his job was securing the scene and that he couldn’t “be in two places at once.”

The video of Thao’s interview was made available Friday after Minnesota Attorney General Keith Ellison’s office filed it to support a motion to have all four officers tried jointly.

The next court hearing for the four is scheduled for Sept. 11.