MEMPHIS, Tenn. (AP) — Two of the men arrested in connection with the killing of rapper Young Dolph had a history of violent crime, a prosecutor said Wednesday.

Authorities also said that they have not yet identified a motive for the shooting. Young Dolph, whose real name was Adolph Thornton Jr., was gunned down in a daylight ambush at a popular cookie shop in Memphis on Nov. 17. 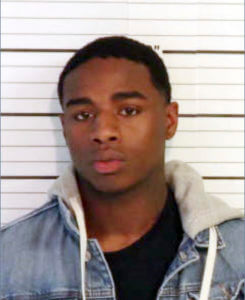 Justin Johnson, who was captured Tuesday in Indiana, nearly two months after the slaying, was held in juvenile custody after he was tried at age 17 on charges of aggravated rape and aggravated robbery, Shelby County District Attorney General Amy Weirich told a news conference.

He also served time for shooting three people at a bowling alley and had been arrested on state drug and weapons charges, Weirich said.

Johnson, now 23, was traveling on a highway in Indiana on Tuesday when he was stopped and arrested outside of Terre Haute by authorities from the U.S. Marshals office, U.S. Marshal Tyreece Miller said. Johnson is being held on a federal probation violation and appeared before a federal magistrate in Indiana on Wednesday, Miller said. Authorities had issued an arrest warrant for him on first-degree murder and other charges. He will be extradited to Memphis, Miller said.

A passenger in the car, Shondale Barnett, 27, was also arrested and charged with being an accessory after the fact to first-degree murder and is awaiting extradition to Tennessee, Miller said.

Cornelius Smith, 32, served three years for attempted robbery and aggravated assault, Weirich said. He was arrested last month on an auto-theft warrant involving the vehicle used in Young Dolph’s killing, and a grand jury indicted him on first-degree murder and other charges on Tuesday. He’s being held in Shelby County jail in Memphis.

Police previously said two men got out of a white Mercedes-Benz and fired shots into Makeda’s Homemade Cookies bakery where Young Dolph, 36, was buying cookies, and killed him. Police released photos taken from surveillance video that captured the shooting. Memphis Police Director Cerelyn “CJ” Davis said Wednesday that she could not provide details on evidence or provide a theory about a motive in the shooting. 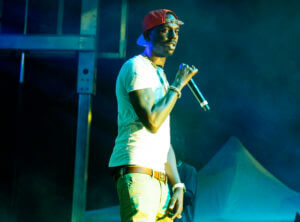 FILE – Young Dolph performs at The Parking Lot Concert in Atlanta on Sunday, Aug. 23, 2020. Officials say rapper Young Dolph has been fatally shot at a cookie shop in his hometown of Memphis, Tennessee, and a search is underway for the shooter. (Photo by Paul R. Giunta/Invision/AP, File)

“We’re just not ready to put that out there right now,” she said.

Authorities said they received more than 500 tips from people in Indianapolis, Houston, Dallas, and the state of Virginia.

A private funeral was held on Nov. 30 and a section of a street in the neighborhood where he grew up was renamed for him Dec. 15. He also was honored at a public celebration at FedExForum, the home of the NBA’s Memphis Grizzles and the University of Memphis men’s basketball team.

Young Dolph was born in Chicago and moved to Memphis with his parents when he was 2. He released numerous mixtapes, starting with 2008’s “Paper Route Campaign,” and multiple studio albums, including his 2016 debut “King of Memphis.” He also collaborated on other mixtapes and albums with fellow rappers Key Glock, Megan Thee Stallion, T.I., Gucci Mane, 2 Chainz and others.

Young Dolph had survived previous shootings. He was shot multiple times in September 2017 after a fight outside a Los Angeles hotel. In February of that year, his SUV was shot at in Charlotte, North Carolina, more than 100 times. That was the inspiration for the song “100 Shots.” He said he survived because he had bulletproof panels in his vehicle.