COLUMBUS, Ohio (AP) — The trial of an Ohio doctor accused in multiple hospital deaths began Feb. 22, with the defendant turning down a possible last-minute plea deal, and jurors hearing two sides of what led to the deaths of 14 patients under the doctor’s care.

Dr. William Husel is accused of ordering excessive painkillers for patients in the Columbus-area Mount Carmel Health System. He was indicted in cases involving at least 500 micrograms of the powerful painkiller fentanyl.

Prosecutors said ordering such dosages for a nonsurgical situation indicated an intent to end lives. Husel has pleaded not guilty and says he was providing comfort care for dying patients, not trying to kill them. 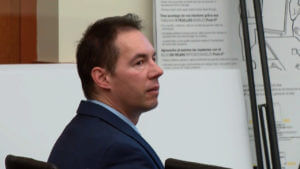 In this image from video, defendant Dr. William Husel listens to testimony during his trial proceedings in Columbus, Ohio, on Feb. 28, 2022. (Court TV)

Over the next few weeks, jurors are expected to hear from at least 50 prosecution witnesses, likely medical experts, as well as additional defense witnesses.

The long-anticipated trial began minutes after assistant Franklin County prosecutor David Zeyen told Judge Michael Holbrook that he’d discussed with Husel’s attorneys the possibility of a plea deal that would have reduced murder charges to reckless homicide with up to 30 years in prison, with early release a possibility. Zeyen emphasized it wasn’t a formal offer.

Husel attorney Jose Baez called it “an extremely reasonable starting point,” but said his client wanted to move forward with a trial to have his day in court.
Prosecutors would provide evidence that Husel administered massive amounts of painkillers to patients, far more than was medically necessary to ease pain, assistant Franklin County prosecutor Janet Grubb said in an opening statement. The dosages were often given as ventilators were removed.

Instead of recommended dosages of 50 to 100 micrograms of fentanyl, Husel administered 600 to 2,000 micrograms at a time, Grubb said.

Grubb said the reputation of Husel, a widely admired doctor with specialties in anesthesiology and critical care, allowed him to overcome concerns that staff working in the evening intensive care unit had about excessive dosages.

“Ultimately, our case is about the fact that William Husel caused the death of our 14 victims,” Grubb said.

Husel, 46, was originally charged with 25 counts of murder. Last month, a judge agreed to dismiss 11 of those counts against Husel at the prosecution’s request.

A different prosecutor brought 25 charges in 2019. Current Prosecutor Gary Tyack said in January 2021 he favored dismissing some counts against Husel and proceeding with fewer cases.

Baez argued Husel was trying to help patients, some in the last moments of their life, deal with their pain. He wasn’t involved in medically assisted death, but in living well medically, he said.

“This case, ladies and gentlemen, is about 100% comfort care,” Baez said during his opening statement. “A person’s right to live their final moments in peace and dignity.”

Baez suggested the state’s case ignored the fact that multiple other health care professionals were involved in the patients’ cases, and that Mount Carmel was more interested in protecting its Medicare and Medicaid patients once the news about the patient deaths broke than finding out what really happened.

Mount Carmel has reached settlements totaling more than $16.7 million over the deaths of at least 17 patients, with more lawsuits pending.