BEDFORD HEIGHTS, Ohio (WEWS) — An Ohio woman accused of stabbing her 5-year-old daughter to death is being held on a $2 million bond.

Menokka Nealy is accused of killing her daughter on Feb. 12. Police say she claimed responsibility for the killing, but entered a not guilty plea during her first court appearance on Feb. 15.

Nealy is charged with murder and felonious assault. 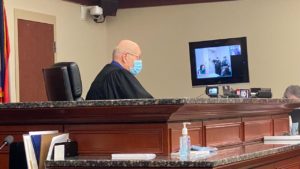 Menokka Nealy appears by video in a Cuyahoga County courtroom on Feb. 15, 2022. Nealy is accused of killing her 5-year-old daughter. (WEWS)

Police say the child was found with multiple stab wounds on the bedroom floor inside a Bedford Heights apartment.

Bedford Heights detective Ericka Payne said that Nealy spoke with officers about the incident but offered no motive.

“She told us she was the one responsible for doing this,” Payne added. “There is no reason why to justify it or explain it.”

Payne said a family member was checking in on a Valentine’s Day gift for E’Nijah when Nealy admitted to hurting the five-year-old, which prompted a wellness check.

The Cuyahoga County Medical Examiner’s Office responded to the apartment complex, took custody of the child’s body and has since identified the child.

A spokesperson for Bedford Schools confirmed E’Nijah was a kindergarten student at Central Primary School.

The district released the following statement:

“We have our social-emotional learning team members (social workers, school counselors, mental health therapists) at the school today and for as long as necessary to talk to any students, staff or family who want to talk.”

This story was originally published Feb. 15, by WEWS in Cleveland, an E.W. Scripps Company.