McALESTER, Okla. (AP) — Oklahoma executed a man Thursday who was convicted of killing an elderly couple and committing other crimes 20 years ago before authorities caught up to him in Texas after a manhunt.

Scott James Eizember, 62, received a lethal injection at the Oklahoma State Penitentiary in McAlester and was pronounced dead at 10:15 a.m. 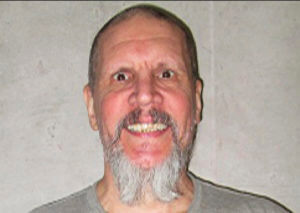 FILE – This Feb. 2, 2018, photo provided by the Oklahoma Department of Corrections shows Scott Eizember. On Thursday, Jan. 12, 2023, Oklahoma plans to execute Eizember, who was convicted of killing an elderly couple and committing other crimes 20 years ago before authorities caught up to him in Texas more than a month later. (Oklahoma Department of Corrections via AP, File)

“I’m at peace,” Eizember said, strapped to a gurney with an intravenous line in his left arm. “My conscience is clear, completely. I love my children.”

Once the lethal drugs began to flow, Eizember, who had a close-cropped beard, could be seen chatting with his spiritual adviser, the Rev. Jeffrey Hood, who was inside the execution chamber with him. He lifted his head at one point and mouthed the words, “I love you,” toward his daughter and attorneys who were among 17 people seated in the witness room.

Eizember’s breathing became labored and he was declared unconscious at 10:07 a.m. He appeared to stop breathing at 10:10 a.m. He was pronounced dead at 10:15 a.m.

Eizember’s attorneys did not deny he killed A.J. Cantrell, 76, and his wife, Patsy Cantrell, 70, on Oct. 18, 2003. But they told the state’s Pardon and Parole Board last month that the killings were unplanned and spontaneous and his life still had value.

The board voted 3-2 to reject a clemency recommendation.

“He has felt remorse every day of his imprisonment. There is no reason to kill him next month other than revenge,” attorney Mark Henricksen told the board.

After the execution, several members of the Cantrell spoke of the pain the family has endured and voiced concern at the length of time it took for Eizember to be executed. 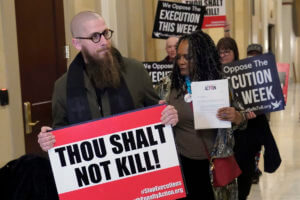 The Rev. Jeffrey Hood of Arkansas, left, and former Oklahoma State Sen. Connie Johnson, right, lead protestors to the office of Oklahoma Gov. Kevin Stitt to deliver petitions against the death penalty, Wednesday, Jan. 11, 2023, in Oklahoma City. The Oklahoma Department of Corrections has reversed its position and now says it will allow Hood, an anti-death penalty minister, inside the execution chamber for the upcoming execution of Scott Eizember. Eizember was convicted of killing A.J. Cantrell, 76, and his wife, Patsy Cantrell, 70, in 2003. (AP Photo/Sue Ogrocki)

“After living this nightmare, I must say that 20 years is too long for justice to be served,” Johnny Melton, the slain couple’s nephew, said in a statement read on behalf of the family. “We want to get it right and we absolutely want to ensure that everyone’s rights are protected, but the process is much too slow.”

Melton also stressed the importance of addressing domestic violence and improving mental health treatment, in the state of Oklahoma and across the nation.

“I know this is going to be a controversial statement, but I believe it to be a fact. It is the abuser who needs help. They need it when they are young,” Melton said. “By the time the victim needs help, it’s too late.”

Prosecutors allege Eizember broke into the Cantrells’ home in Depew, Oklahoma, after he saw them leave so he could lie in wait for his ex-girlfriend, Kathryn Smith, who lived across the street. When the couple came home unexpectedly, prosecutors say Eizember shot and killed Patsy Cantrell with a shotgun he found inside the home and then bludgeoned A.J. Cantrell to death with the weapon.

After killing the couple, Eizember walked across the street and entered Smith’s home, shot her son in the back and attacked her mother, prosecutors say. Both survived and authorities say Eizember ultimately sped out of town in a stolen vehicle. 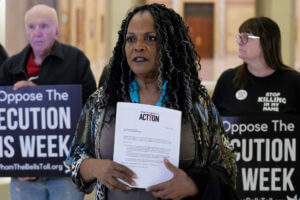 Former Oklahoma State Sen. Connie Johnson address the media before protestors deliver petitions against the death penalty to the office of Oklahoma Gov. Kevin Stitt, Wednesday, Jan. 11, 2023, in Oklahoma City. The Oklahoma Department of Corrections has reversed its position and now says it will allow The Rev. Jeffrey Hood, an anti-death penalty minister, inside the execution chamber for the upcoming execution of Scott Eizember. Eizember was convicted of killing A.J. Cantrell, 76, and his wife, Patsy Cantrell, 70, in 2003.(AP Photo/Sue Ogrocki)

Police believe Eizember hid out in wooded areas around the towns of Depew and Bristow for more than 30 days while law enforcement agencies launched a large manhunt to track him down.

Eizember eventually made his way to Arkansas in a stolen car and kidnapped a physician and his wife at gunpoint, prosecutors said. After driving with the couple to Texas, he finally was captured near the town of Lufkin after the physician pulled out a pistol stashed in the couple’s van and shot Eizember four times, authorities said.

A federal jury in Arkansas convicted Eizember in December 2005 on two counts of kidnapping and one count each of carjacking and using a firearm in a crime of violence. He was sentenced to 25 years in federal prison in that case.

Eizember filed a last-minute lawsuit seeking to have his spiritual adviser with him inside the death chamber during his execution after the Department of Corrections rejected the minister because of Hood’s history of anti-death penalty activism, including arrests. The DOC reversed course on that decision Wednesday, citing concerns from the Cantrell family that the decision could lead to Thursday’s execution being called off.

The U.S. Supreme Court ruled last year that states must accommodate the wishes of death row inmates who want to have their pastors pray aloud and even touch them during their executions.

Oklahoma uses a three-drug lethal injection method starting with the sedative midazolam, rendering the person unconscious, followed by a paralytic vecuronium bromide and finally potassium chloride, which stops the heart.

Eizember’s execution was the eighth in Oklahoma since the state resumed executions in 2021. 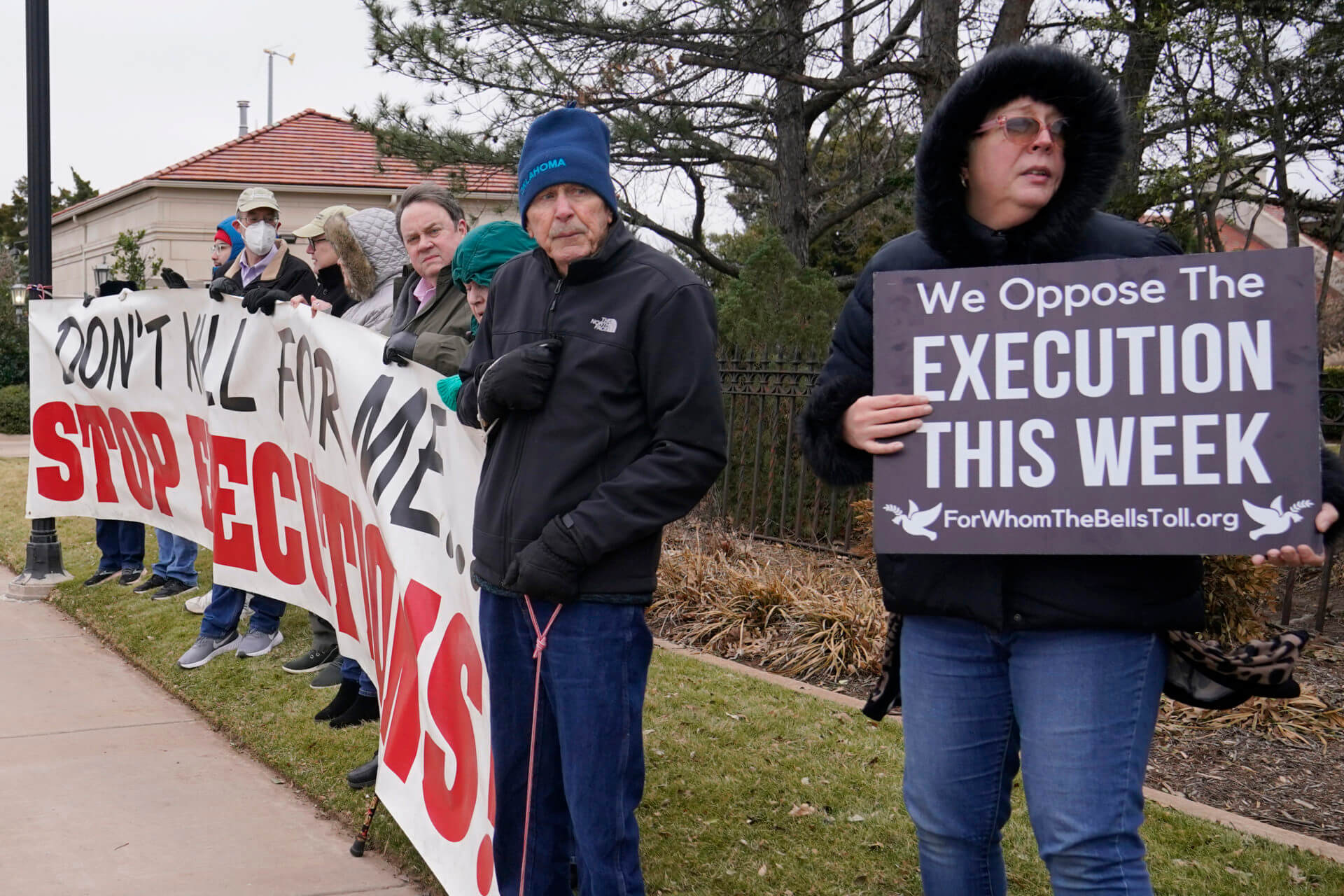 Death penalty opponents protest on the street outside the Governor's mansion, Thursday, Jan. 12, 2023, in Oklahoma City. Oklahoma executed a Scott James Eizember, 62, who was convicted of killing an elderly couple and committing other crimes 20 years ago before authorities caught up to him in Texas after a manhunt. (AP Photo/Sue Ogrocki)
MORE NEWS