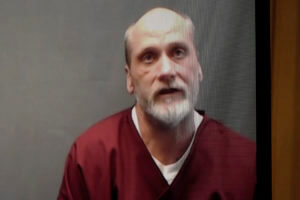 FILE – In this photo from a video screen, death row inmate James Coddington speaks to the Oklahoma Board of Pardon and Parole on Wednesday, Aug. 3, 2022, in Oklahoma City. Oklahoma Gov. Kevin Stitt has rejected clemency for Coddington, who is facing execution for the 1997 hammer killing of a man. Stitt’s decision on Wednesday, Aug. 24, 2022, paves the way for Coddington to be executed by lethal injection on Thursday. (AP Photo/Sue Ogrocki, File)

espite a recommendation from the state’s Pardon and Parole Board that his life be spared.

James Coddington was convicted and sentenced to die for the beating death of his friend and coworker, 73-year-old Albert Hale, inside Hale’s Choctaw home. Prosecutors say Coddington, who was 24 at the time, became enraged when Hale refused to give him money to buy cocaine.

“After thoroughly reviewing arguments and evidence presented by all sides of the case, Governor Kevin Stitt has denied the Pardon and Parole Board’s clemency recommendation for James Allen Coddington,” Stitt’s office said in a statement.

During a clemency hearing this month before the state’s five-member Pardon and Parole Board, an emotional Coddington, now 50, apologized to Hale’s family and said he is a different man today.

“I’m clean, I know God, I’m not … I’m not a vicious murderer,” Coddington told the board. “If this ends today with my death sentence, OK.”

Mitch Hale, Albert Hale’s son who had urged the parole board not to recommend clemency, said he feels a sense of relief with Stitt’s decision. 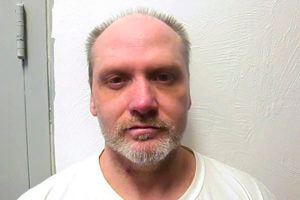 FILE – This Feb. 5, 2021, photo provided by the Oklahoma Department of Corrections shows James Coddington. Oklahoma Gov. Kevin Stitt has rejected clemency for Coddington, who is facing execution for the 1997 hammer killing of a man. Stitt’s decision on Wednesday, Aug. 24, 2022, paves the way for Coddington to be executed by lethal injection on Thursday. (Oklahoma Department of Corrections via AP, File)

“Our family can put this behind us after 25 years,” Hale, 64, said. “No one is ever happy that someone’s dying, but (Coddington) chose this path … he knew what the consequences are, he rolled the dice and lost.”

Hale said he, his wife, goddaughter and a friend were en route to McAlester to attend the execution.

Coddington’s attorney, Emma Rolls, told the panel that Coddington was impaired by years of alcohol and drug abuse that began when he was an infant and his father put beer and whiskey into his baby bottles.

Rolls said Coddington doesn’t have any pending appeals that would delay or stop his execution on Thursday.

“While we are profoundly disheartened by this decision, we appreciate the pardons board’s careful consideration of James Coddington’s life and case, Rolls said in a statement following Stitt’s announcement.

The Rev. Don Heath, chair of the Oklahoma Coalition to Abolish the Death Penalty said “there is no mercy or forgiveness” in Stitt’s heart.

“I am surprised, and, quite honestly, angry at Gov. Stitt’s rejection of clemency for James Coddington. Stitt’s statement does not give a reason for his denial — it simply states that a jury convicted Coddington of first-degree murder and sentenced him to death,” Heath said in a statement.

“We have 25 executions scheduled over the next 29 months. I am afraid that the Pardon and Parole Board hearings will be moot exercises,” Heath said.

The parole board had voted 3-2 to recommend Coddington for clemency.

Stitt, a Republican, had said he planned to meet with Hale’s family, prosecutors and Coddington’s attorneys before making his decision.

Coddington was twice sentenced to death for Hale’s killing, the second time in 2008 after his initial sentence was overturned on appeal.

Stitt has granted clemency only one time, in November, to death row inmate Julius Jones just hours before Jones was scheduled to receive a lethal injection. The first-term governor commuted Jones’ sentence to life in prison without parole.

Jones’ case had drawn national attention after it was featured in “The Last Defense,” a three-episode documentary that cast doubt on Jones’ conviction, and there were numerous protests in Oklahoma City in the days leading up to Jones’ scheduled execution date.

Stitt said in an interview with The Associated Press earlier this month that had he allowed Jones’ execution to go forward “that would have definitely torn our state apart.”

Coddington’s execution would the the fifth since Oklahoma resumed carrying out the death penalty in October.

The state had halted executions in September 2015 when prison officials realized they had received the wrong lethal drug.

It was later learned the same wrong drug had been used previously to execute an inmate, and executions in the state were put on hold.