EDGEWOOD, Md. (WMAR) — An unhappy customer at a Maryland Papa John’s attacked a store employee, who in turn stabbed him with a pizza spear in self-defense, said the Sheriff’s Office.

Harford County Sheriff’s deputies were called to the store for a report of a stabbing. 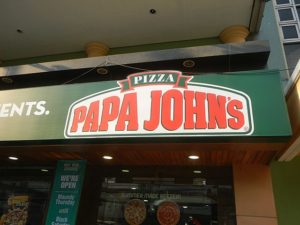 The incident began when Herbert Harris, 40, went to the restaurant to complain that a pizza he had just bought didn’t include garlic sauce and pepperoncini, according to the investigation.

He got into an argument with a store employee, 26-year-old Robert Klein of Edgewood. Harris allegedly went behind the counter, pushed Klein, and started chasing him around the store, attacking him with a metal pizza paddle.

Klein, who was in fear for his safety, grabbed a pizza spear and stabbed Harris in self-defense, said the sheriff’s office.

Harris kept yelling at store employees and didn’t leave the store until deputies arrived. When they arrived, he was holding a T-shirt to his stomach, saying an employee stabbed him.

Harris was charged with second-degree assault, after being take to an area hospital with non-life-threatening injuries.

This story was originally published Aug. 18, 2022 by WMAR in Baltimore, an E.W. Scripps Company.