BOSTON (AP) — A former casino executive who was one of just two parents to go to trial in the sprawling college admissions bribery scandal was sentenced Wednesday to serve one year and one day in federal prison, the stiffest sentence so far handed down in the case, federal prosecutors said.

Gamal Abdelaziz was also ordered to serve two years of supervised release, 400 hours of community service and pay a fine of $250,000 in the sentence handed down by Judge Nathaniel Gorton in Boston federal court. 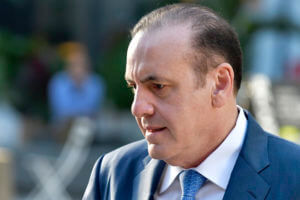 FILE— Gamal Abdelaziz arrives at federal court for his trial, Thursday, Oct. 7, 2021, in Boston. Abdelaziz, a former casino executive from Las Vegas who was found guilty in his college admissions bribery trial, is scheduled to be sentenced on Wednesday Feb. 9, 2022. (AP Photo/Josh Reynolds, File)

Abdelaziz didn’t comment after the sentencing, but in court apologized to his family and friends and asked the judge for mercy. His lawyer Brian Kelly plans to appeal and “vindicate” his client.

The 65-year-old Las Vegas resident was convicted of fraud and bribery conspiracy in October after prosecutors said he paid $300,000 to get his daughter into the University of Southern California as a basketball recruit even though she didn’t even make it onto her high school’s varsity team.

In legal filings ahead of Wednesday’s sentencing, Abdelaziz’s lawyers sought a four-month prison stint. They argued their client shouldn’t receive a substantially higher sentence than other defendants just because he decided to fight the charges in court.

The other parent is John Wilson, a former Staples Inc. executive who was also convicted in October and faces sentencing later this month.

Prosecutors, however, sought 14 months in prison for Abdelaziz, arguing the former Wynn Resorts executive failed to accept responsibility for his actions.

Dozens of other defendants have already pleaded guilty in the scheme and served their time. “Desperate Housewives” star Felicity Huffman was sentenced to 14 days in prison. “Full House” star Lori Loughlin was sentenced to two months and her fashion designer husband Mossimo Giannulli was sentenced to five months.

Abdelaziz was among nearly 60 people charged in an investigation dubbed by authorities as “Operation Varsity Blues” that also ensnared athletic coaches at Georgetown, Yale and other prestigious schools.

Abdelaziz, who is originally from Egypt, said he believed his payments were legitimate donations and had no idea that Rick Singer, the admissions consultant he’d worked with, was actually using the money as bribes and was falsifying or exaggerating his daughter’s athletic credentials.

But prosecutors cited secretly recorded phone calls between Singer and Abdelaziz that they say showed he was in on the scheme.