RALEIGH, N.C. (AP) — The parents of a 15-year-old boy accused of killing five people in a North Carolina shooting rampage released a statement saying they are “overcome with grief” and saw no warning signs before the killings. 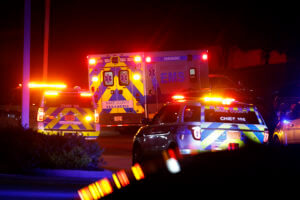 The statement Tuesday by Alan and Elise Thompson also confirmed that one of Austin Thompson’s five victims on Thursday night was his own 16-year-old brother, James. Witnesses said in 911 calls that the shooter opened fire with what appeared to be a shotgun in a neighborhood northeast of downtown Raleigh and along an adjacent walking trail.

“Our son Austin inflicted immeasurable pain on the Raleigh community, and we are overcome with grief for the innocent lives lost,” the parents said.

They also said in their statement that they will fully cooperate with law enforcement to help investigators understand what happened, but that they have questions themselves. Authorities have not discussed a motive for the shootings.

“There were never any indications or warning signs that Austin was capable of doing anything like this,” the statement said.

Reached by phone Tuesday night, Elise Thompson declined to comment outside of the statement. She also didn’t immediately respond to a message left Wednesday seeking comment about her son Austin’s condition.

Austin Thompson was hospitalized in critical condition following his arrest on Thursday night, hours after the shooting began. WRAL-TV reported Wednesday that his condition had improved but that he remained in an intensive care unit, citing information from his mother.

The Associated Press generally does not name people under 18 who are accused of crimes, but is identifying Austin Thompson because of the severity and publicity of the shootings and because his parents have voluntarily named him in their public statement.

The Wake County prosecutor has said she will pursue adult charges against the suspect. Authorities had previously identified the shooter as a 15-year-old boy but had not publicly released his name.

Investigators have not disclosed where Austin Thompson obtained the gun or guns used in the shooting. A lawyer for the parents didn’t immediately respond to an email Wednesday asking if the parents knew how he got the weaponry he used.

Callers who dialed 911 during the shooting rampage described encountering bodies on the streets or front yards of their neighborhood and along a trail popular with runners and bikers, according to recordings released by authorities. Witnesses said shooter was wearing camouflage and using a shotgun in the attacks that began shortly after 5 p.m.

The shooting drew officers from numerous agencies to the neighborhood as the suspect eluded capture for several hours. The victims, ranging in age from 16 to their late 50s and were felled going about their daily routines, police and loved ones said. Among those killed was an off-duty police officer. In addition to those killed, two others were wounded.

Several people acquainted with Austin Thompson before the shooting – including a neighbor, a classmate and a victim’s husband who lived nearby — told The AP that he was quiet but seemed friendly.

Tracey Howard, whose wife of five years Nicole Connors was among those killed, said that Austin Thompson and his brother lived two doors down. He said that he would talk college football with their father and that he would exchange waves with the two boys.

“I’d see them coming from school. `How you doing?’” he said on Friday, raising his arm to demonstrate. “They’d wave back. Sometimes they didn’t. But we never had any beef or problems with them.”

Another neighbor, Jennifer Magnuson, said that her three teenage children attended high school with the boys and rode the bus with them. She said her children described Austin and his brother as keeping to themselves.

“They said that they were just very quiet, very shy. Didn’t talk very much on the bus. And they were a little weird. Like, they just wouldn’t socialize, except with each other.”

She said her 16-year-old son tried to socialize with Austin and his brother, but the boys didn’t seem interested.

“My 16-year-old, he talked to them a couple of times, just to kind of see, to get a feel for them. But they, the boys just seemed like they just were not willing to be friends or just didn’t want to talk or anything like that,” she said. “So, my son’s like, `All right. Well, I tried.′ And just, yeah, went on.”

Omer Rosas, a sophomore at Knightdale High School who was in classes with Austin Thompson, said they talked frequently in class and described him as personable. He said he was shocked to find out Friday morning that his classmate had been arrested in connection with the shooting. He said that Austin Thompson liked to run and was considering joining the track team.

“I did not expect it to be him,” Rosas said in an interview outside the school Friday. “He was very calm. He wasn’t like a mean person. He was open to be nice to everyone.”