WASHINGTON (AP) — Passage of the House Democrats’ far-reaching police overhaul bill returned attention to the Senate on Friday, as the divided Congress struggles to address the global outcry over the killings of George Floyd and other Black Americans.

House Speaker Nancy Pelosi signaled she’s willing to negotiate if the Senate is able to approve its own bill. But she said Democrats have no interest in engaging with Senate Majority Leader Mitch McConnell on the Republican-only package, which collapsed this week after Senate Democrats blocked it from debate. 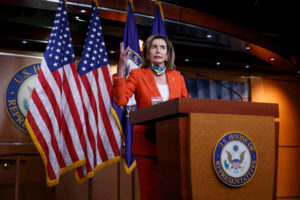 “The Senate has to do better,” Pelosi said.

The House approved the George Floyd Justice in Policing Act late Thursday in a vote heavy with emotion and symbolism. It was one month to the day after Floyd’s death, which sparked a national reconsideration of policing tactics and racial injustice.

The legislative package from Democrats is perhaps the most ambitious set of proposed changes to police procedures and accountability in decades. Backed by the nation’s leading civil rights groups, it aims to match the moment of demonstrations that filled streets across the nation. It has almost zero chance of becoming law.

President Donald Trump’s administration said he would veto the bill. McConnell has said the bill would not pass the Republican-held chamber.

After the GOP policing bill stalled this week, blocked by Democrats, Trump shrugged.

“If nothing happens with it, it’s one of those things,” Trump said. “We have different philosophies.” 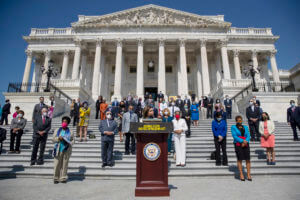 House Speaker Nancy Pelosi of Calif., joined by House Democrats spaced for social distancing, speaks during a news conference on the House East Front Steps on Capitol Hill in Washington, Thursday, June 25, 2020, ahead of the House vote on the George Floyd Justice in Policing Act of 2020. (AP Photo/Carolyn Kaster)

Congress is now at a familiar impasse despite protests outside their door and polling that shows Americans overwhelmingly want changes after the deaths of Floyd, Breonna Taylor and others in interactions with law enforcement. The two parties are instead appealing to voters ahead of the fall election, which will determine control of the House, Senate and White House.

In the month since Floyd’s May 25 death, funeral services were held for Rayshard Brooks, a Black man shot and killed by police in Atlanta. Thursday was also what would have been the 18th birthday of Tamir Rice, a Black boy killed by police in Ohio in 2014. In New York, prosecutors this week filed criminal charges against an officer who put a Black man in what they said was a banned chokehold.

Even though the proposals from Congress share common ground, they diverge widely. One main difference is that several of the changes proposed by Republicans — such as restrictions on police use of chokeholds, which are already prohibited in many jurisdictions — are banned by Democrats.

Pelosi said she’s all for bringing ideas to the table, but “if one person is saying chokeholds and the other is saying no chokeholds, it’s very hard to compromise.”

Law enforcement organizations and some of the nation’s leading business groups, including the influential Business Roundtable of leading CEOs, are encouraging Congress to keep working toward a solution. But that seems unlikely, with lawmakers’ positions hardening and the parties settled in for a political standoff ahead of campaign season and elections. 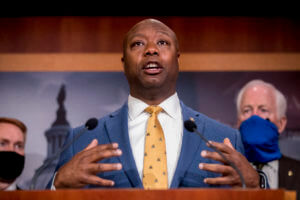 FILE – In this June 17, 2020, file photo, Sen. Tim Scott, R-S.C., accompanied by Republican senators speaks at a news conference to announce a Republican police reform bill on Capitol Hill in Washington. Initially reluctant to speak on race, Scott is now among the Republican Party’s most prominent voices teaching his colleagues what it’s like to be a Black man in America. (AP Photo/Andrew Harnik, File)

Sen. Tim Scott of South Carolina, the only Black Republican senator, who drafted the GOP package, said Thursday that his bill is now “closer to the trash can than it’s ever been.”

During the daylong debate, several Democratic lawmakers read the names of those killed, shared experiences of racial bias and echoed support of Black Lives Matter activists.

Rep. Karen Bass, D-Calif., the chairwoman of the Congressional Black Caucus, said hundreds of thousands of people “in every state in the union” are marching in the streets to make sure Floyd “will not be just another Black man dead at the hands of the police.”

Rep. Barry Loudermilk, R-Ga., stood up to say he just didn’t understand what was happening in the country — from Floyd’s death to the protests that followed. Several Black Democratic lawmakers rose to encourage him to pick up a U.S. history book or watch some of the many films now streaming about the Black experience in America.

The 236-181 House vote was largely on party lines. Three Republicans joined Democrats in favor of passage, and no Democrats opposed it. Democrats also voted against the House version of the Senate GOP bill.

Central to both bills would be the creation of a national database of use-of-force incidents, which is viewed as a way to provide transparency on officers’ records if they transfer from one agency to another. The bills would also set up new training procedures, including beefing up the use of body cameras. 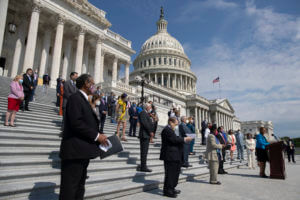 Rep. Karen Bass, D-Calif., joined by House Speaker Nancy Pelosi of Calif., and other House Democrats spaced for social distancing, speaks during a news conference on the House East Front Steps on Capitol Hill in Washington, Thursday, June 25, 2020, ahead of the House vote on the George Floyd Justice in Policing Act of 2020. (AP Photo/Carolyn Kaster)

The Democratic bill goes further, revising the federal statute for police misconduct and holding officers personally liable for damages in lawsuits. It also would halt the practice of sending military equipment to local law enforcement agencies.

Neither bill goes as far as some activists want, with calls to defund the police and shift resources to other community services.

Scott insisted he was open to amending his bill with changes proposed by Democrats. But Democrats doubted McConnell would allow a thorough debate and instead blocked the GOP bill in hopes of renegotiating. 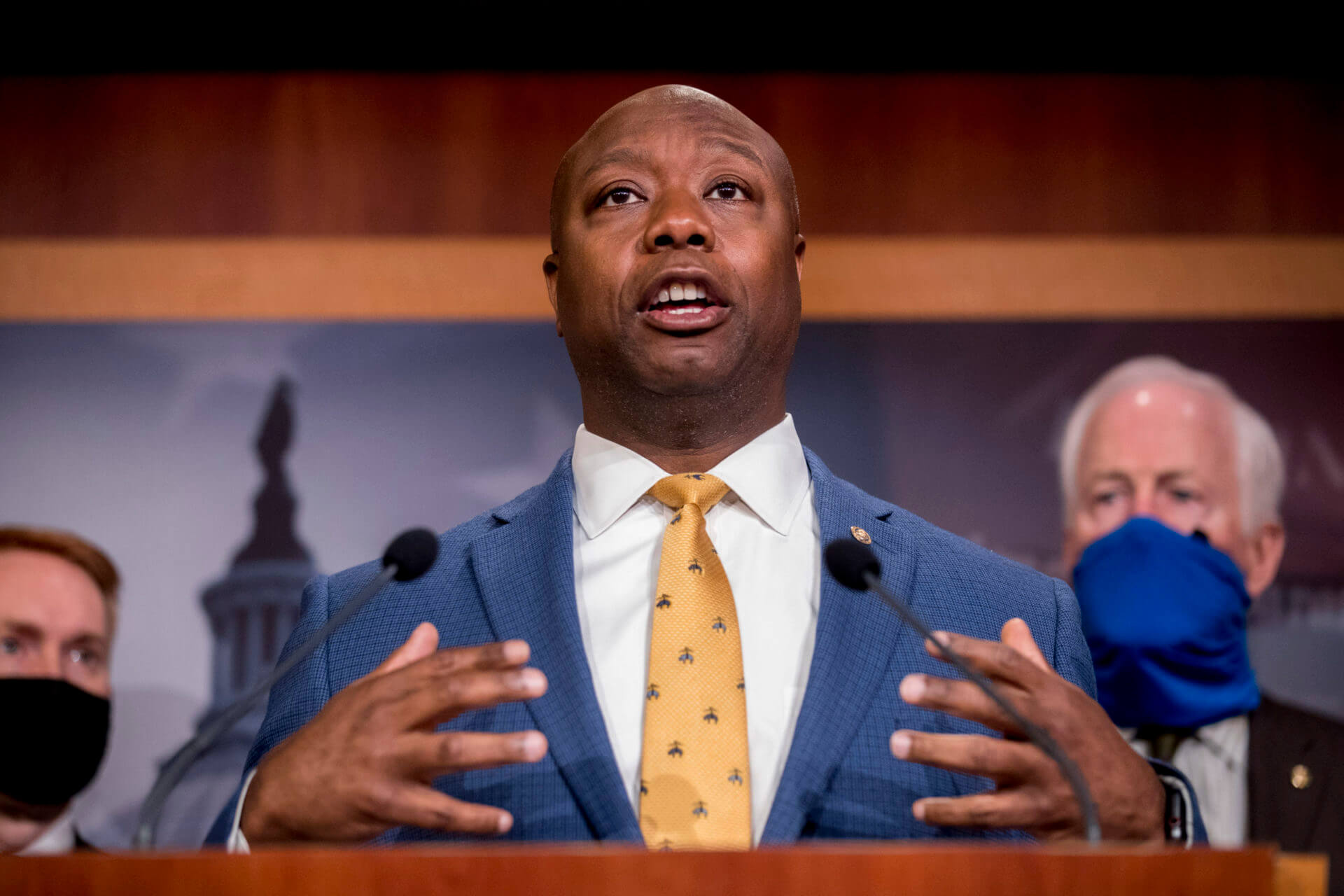 FILE - In this June 17, 2020, file photo, Sen. Tim Scott, R-S.C., accompanied by Republican senators speaks at a news conference to announce a Republican police reform bill on Capitol Hill in Washington. Initially reluctant to speak on race, Scott is now among the Republican Party’s most prominent voices teaching his colleagues what it’s like to be a Black man in America. (AP Photo/Andrew Harnik, File)
MORE NEWS