PHILADELPHIA (AP) — Police shot and killed a 27-year-old Black man on a Philadelphia street after yelling at him to drop his knife, sparking violent protests that police said injured 30 officers and led to dozens of arrests.

The shooting occurred before 4 p.m. Monday as officers responded to a report of a person with a weapon, police spokesperson Tanya Little said.

Officers were called to the Cobbs Creek neighborhood and encountered the man, later identified as Walter Wallace, who was holding a knife, Little said. Officers ordered Wallace to drop the knife, but he instead “advanced towards” them. Both officers then fired “several times,” Little said.

Wallace was hit in the shoulder and chest. One of the officers then put him in a police vehicle and drove him to a hospital, where he was pronounced dead a short time later, Little said.

Hundreds of people took to the streets to protest the shooting late Monday into early Tuesday, with interactions between protesters and police turning violent at times, the Philadelphia Inquirer reported. Video showed many yelling at officers and crying. 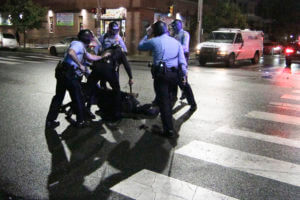 Police surround a man after chasing him down during a violent protest after police shot and killed a 27-year-old Black man on a Philadelphia street early Tuesday, Oct. 27, 2020. (Elizabeth Robertson/The Philadelphia Inquirer via AP)

Police cars and dumpsters were set on fire as police struggled to contain the crowds. More than a dozen officers, many with batons in hand, formed a line as they ran down 52nd Street chasing protesters away from the main thoroughfare. The crowd largely dispersed then.

Thirty officers were injured, most of them from being struck by projectiles such as bricks and rocks, according to preliminary information from police. One officer was hospitalized in stable condition with a broken leg and other injuries after she was struck by a pickup truck, police said, while the other injured officers were treated and released.

Video of the fatal confrontation recorded by a bystander and posted on social media shows officers pointing their guns at Wallace as he walks in the street and around a car. He walks toward the officers as they back away from him in the street, guns still aimed at him. They yell at him to put his knife down.

Both then fire several shots and Wallace collapses in the street. A woman runs up to him screaming. Several bystanders then approach him.

It is unclear in the video if he had a knife. Witnesses said he was holding one. 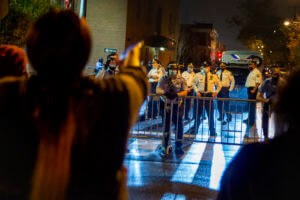 Neighborhood residents shout at police outside the 18th District police station Monday night, Oct. 26, 2020, in Philadelphia. Police shot and killed a 27-year-old Black man on a Philadelphia street after yelling at him to drop his knife, sparking violent protests that police said injured 30 officers and led to dozens of arrests. (Tom Gralish/The Philadelphia Inquirer via AP)

No officers or bystanders were injured in the confrontation, Little said. The names of the officers who fired the shots were not immediately disclosed. Both were wearing body cameras and were taken of street duty pending the investigation.

Some people spoke with city Police Commissioner Danielle Outlaw, who arrived at the scene a short time after the shooting occurred.

“I heard and felt the anger of the community,” Outlaw said in a statement, adding that the video “raises many questions” and that “those questions will be fully addressed by the investigation.”

Wallace’s father, Walter Wallace Sr., told the Inquirer that his son was also a father, was on medication and struggled with mental health issues.

“Why didn’t they use a taser?” he asked.

The races of the police officers weren’t immediately confirmed. The shooting occurred in a predominantly Black neighborhood in west Philadelphia. The Inquirer reported that dozens of protesters gathered at a nearby park and chanted “Black lives matter.” 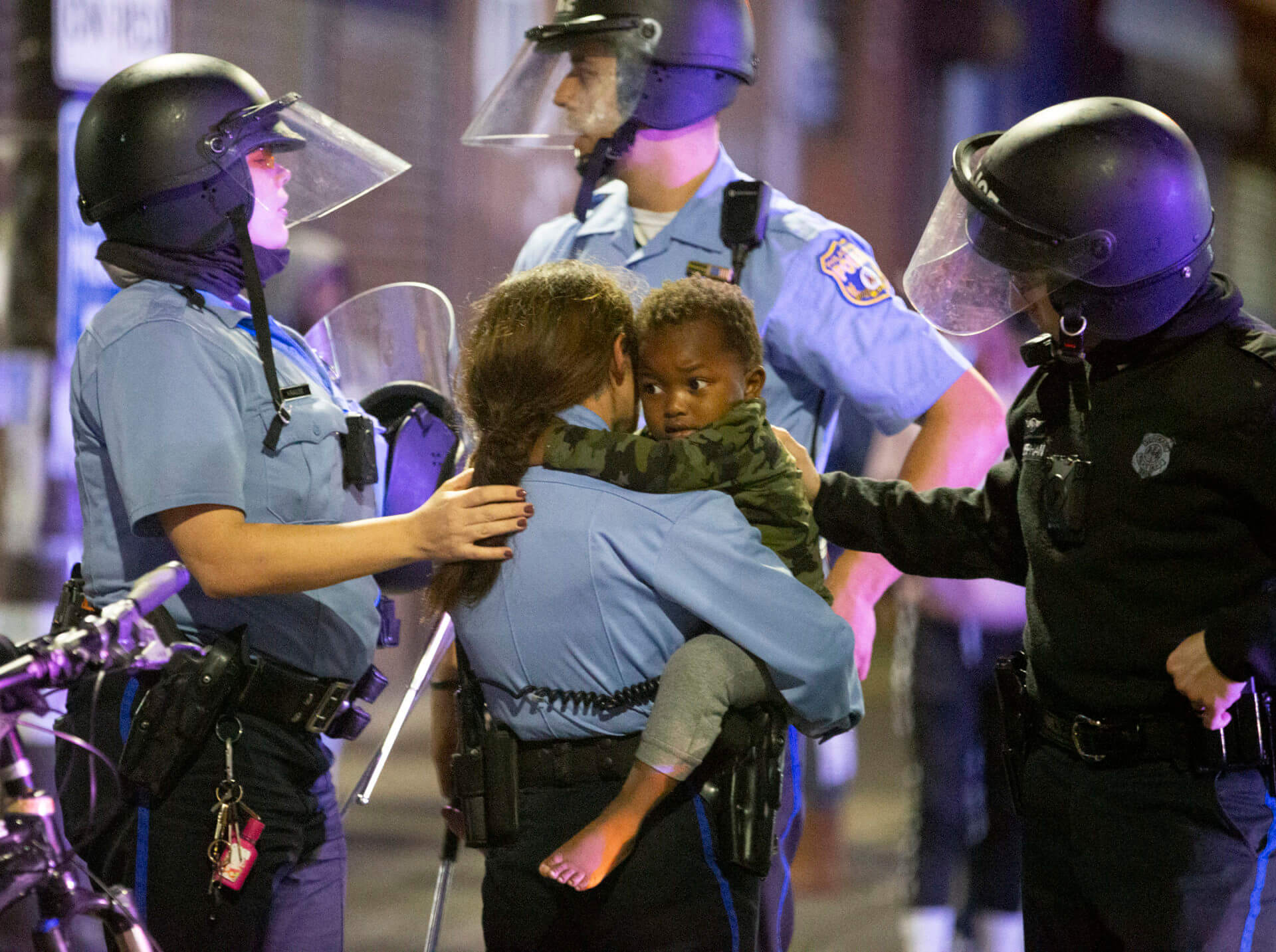 A police officer holds a young boy during a violent protest after police shot and killed a 27-year-old Black man on a Philadelphia street after yelling at him to drop his knife, Monday night, Oct. 26, 2020. (Charles Fox/The Philadelphia Inquirer via AP)
MORE NEWS