TUCSON, Ariz. (AP) — A University of Arizona professor who authorities say was fatally shot on campus by a former graduate student was an expert on desert water issues who faculty and former students described as a kind and brilliant colleague. 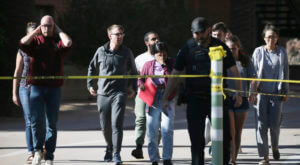 School officials identified Thomas Meixner, who had headed the school’s Department of Hydrology and Atmospheric Sciences, as the victim in Wednesday afternoon’s shooting.

“This incident is a deep shock to our community, and it is a tragedy,” University President Robert Robbins said in a statement late Wednesday. “I have no words that can undo it, but I grieve with you for the loss, and I am pained especially for Tom’s family members, colleagues and students.”

RELATED: University of Arizona murder suspect has troubled past

Police said Meixner was shot inside the Harshbarger Building, which houses the hydrology department. He was taken to a hospital, where he was pronounced dead.

Dervish was being held at the Pima County jail awaiting his initial court appearance. It wasn’t immediately clear what charges he might be face or whether he has a lawyer yet who could speak on his behalf.

According to campus police, a female called 911 at around 2 p.m. Wednesday asking for police to escort a former student out of the Harshbarger Building. Balafas said someone recognized Dervish “and knew that he was not allowed inside the building,” although Balafas didn’t explain why.

Officers were on their way to the building when they received reports that a man shot and wounded someone before fleeing, Balafas said.

The building is near the university bookstore and student union, and campus alerts instructed people to avoid the area, which was under lockdown.

Classes, activities and other campus events were canceled for the rest of the day. Classes resumed on Thursday, but Balafas said the building where the shooting happened might remain closed.

When asked how well Dervish and Meixner knew one another, Balafas said she didn’t know.

Dervish did have previous interactions with the University of Arizona police, according to Sgt. Sean Shields. But he declined to say how many and when they happened.

Meixner earned a doctorate in hydrology and water resources from the university in 1999 and joined the faculty in 2005 before becoming the department head in 2019. He was considered an expert on desert water issues. 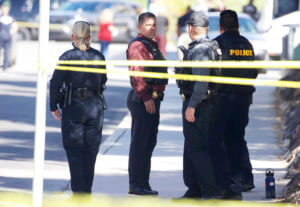 Law enforcement work at the scene of shooting at the John W. Harshbarger Building on the University of Arizona campus in Tucson, Ariz., on Wednesday, Oct. 5, 2022. University of Arizona police say one person was shot and wounded on campus and authorities are searching for the suspect. (Rebecca Sasnett/Arizona Daily Star via AP)

Karletta Chief, director of the university’s Indigenous Resilience Center, said she met Meixner when she was a graduate student in 2001 and he was new to the faculty. While she was not one of his students, her research in hydrology led to frequent collaborations. The last time she saw Meixner, who was a big supporter of Native American and indigenous communities researching water issues, was a week ago at a seminar his department co-sponsored.

Chief said she emailed Meixner and several others in the hydrology department after the shooting, and that she was devastated to learn he was the one who had been shot.

“It’s just unimaginable that anybody would have any direct anger toward him. He was completely the opposite of that. He was just so kind and positive and always wanting to help,” said Chief, who noted that Meixner never mentioned to her if there had been any trouble with a current or former student.

Meixner was also generous outside of campus, Chief said. He once gave money for a marathon that she ran to benefit the Lymphoma Society.

“He shared that he was thankful for me doing this run and he was a cancer survivor,” she said.

It was 20 years ago this month that a disgruntled University of Arizona nursing student shot and killed three nursing professors before taking his own life.